By Heinrich A. Toepfer 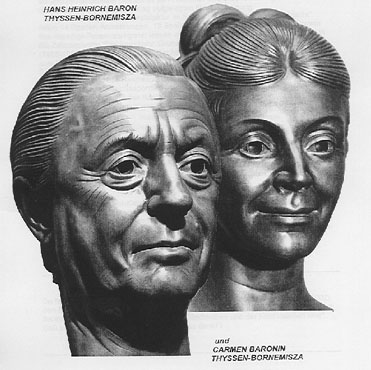 The couple Heinrich and Carmen Thyssen-Bornemisza. They donated the art museum in Madrid.

Hamburg (abg) In a commentary on the death of Baron Hans Heinrich Thyssen-Bornemisza (1921-2002), the Global Player Heinrich A. Toepfer from Hamburg responded to a report in the FAZ titled "The dandy who challenged the Prado". The letter, published in the FAZ on May 10, 2002 is published as a hommage in the December 2002 issue of the Arno Breker Newsletter # 15. Möller points out that Thyssen-Bornemisza put together the largest collection of American paintings in Europe.

"Regretfully, you mention only the social and art collecting aspects of "Heini" Thyssen and totally overlook that he was one of the most successful and sophisticated European businessmen of the post-World War II era. And this exceptional success, combined with his unbelievable capacity to work, made possible for him to put together the largest European art collection since the end of the war, and allow him to enjoy social life in his free time.

We have known each other since 1951, and were good friends since 1955. He would stay up at parties till late at night, but at 6 a.m. was wide awake, and by 8 a.m. he was at a conference table anywhere in Europe, or at his desk. He was blessed with needing only three or four hours of sleep.

His three sisters and he shared the inheritance equally. But already after a few years, his sisters were dependent on his financial support. He built up the world-wide Thyssen-Bornemisza Group, and left the heavy industry and shipbuilding at the right time.

(Heinrich A Toepfer is owner of Toepfer Transport GmbH, an independent shipping firm, and founder of Agriworld AG, a global consulting and management company with offices in the USA and Switzerland. Toepfer is a member of the International Council on Agriculture, Food and Trade)