A KEY TO ARNO BREKER'S ART 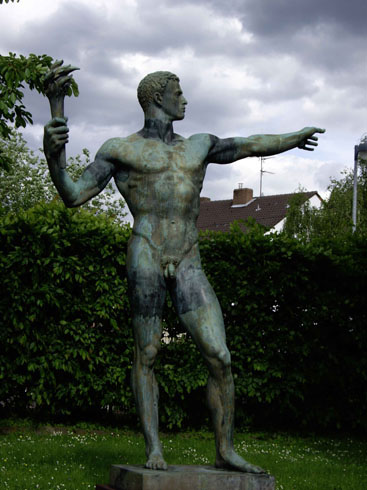 Like a supreme symphonic movement of Brahms or Mahler, Oswald Spengler's idea of the Faustian civilization has illuminated our understanding of the 20th century, and indeed of the last 1000 years of European History.

The great German speaks of "sunset" and "decline," but like the fall season and the great symphonies, the "decline" is something else: a culmination and climax that guarantees renewed hope, renewed birth, given the "insatiable historical voracity of the western mind."

That is why Spengler's ideas are so invigorating, and never more so than in his analysis of the Faustian urge, the gesture of reaching out towards adventure and discovery and of opening out to space, the gesture of the knight errant, explorer and inventor.

The movement into space, and the infinite beyond, finds correspondence in the best sculpture of our century, the sculpture of Arno Breker.

Breker's many gestures of command, of discovery, and of reaching out, of being about to take-off, embody the Faustian dynamic, its readiness to launch into space and seek after adventure.

Thus the gestures of discovery and creation are analogous. Michelangelo's imperious God in the Sistine is answered by the yet limp, expectant arm of Adam, who, a moment later, will learn to point with it himself, being endowed, as the image of God, with the creative forces of the Deity.

It is possible to list some other historical ancestors of Breker's commanding sculptures: the bronze Zeus or Poseidon in the National Museum of Athens, the Tyrannicides in Naples, the Apollo Belvedere, whose pathos of distance so moved Goethe, the Roman rulers Augustus or Trajan and, most of all, the Quirinal Horse Tamers, unusual, since most ancient statues tended to be compact, self-enclosed and self-sufficient. In the Christian Tradition, the Savior rising from the dead, appears with the Italian Renaissance. (The medieval Risen Lord, instead, held Adam's hand to draw him out of Hell.) The salute and ascent of the Victor is a Graeco-Roman Renaissance modification, but more importantly Faustian. As well as being used by Michaelangelo, it is essential to Bernini and the Baroque (the Longinus, the prophet Daniel). By the 19th century this outward-going gesture became democratized, vide the Statue of Liberty, influenced by the marching army on the Arc de Triomphe and by David's Oath of the Horatii, or Girodet's Seven Against Thebes, in the Museë Bonnat, Bayonne.

Rodin, Breker's immediate predecessor, started with The Age of Bronze or, call it "awakening," but reinterprets the gesture with his Orpheus and the Prodigal Son. Since the range of body gestures is limited, it is not surprising that the same "salute" can also express despair, imploration. But with Breker the extended arm, often wielding sword or javelin or staff of Promethean fire; all these functions are subsumed under the Faustian or Wandervogel one; breaking out in space to penetrate and conquer it.

A worthy antecedent to Breker's typical figures is the Michaelangelesque restoration of the Laocoon, whose right arm was imagined by the Renaissance to break free of the entangling serpents, perhaps of the oriental enervation that periodically attacks Western Man.

El Greco's version of the Laocoon is of particular interest to this study, since it is enshrined in Arno Breker's studio, as a continuing inspiration and signal.

The Spanish painter actually portrays the Laocoon himself with the arms in a closed composition, more characteristic of ancient sculpture and the correct version of the original group. It is the legs which are sprawling and pointing out, a position that Breker never uses in heroic statuary, being the reverse of the Faustian explorer stance, in fact typical of female forms (such as Rodin's Iris and the modern dancers of Degas). Meanwhile the Near-Eastern serpent seems to whisper in Laocoon's ear and the hero's eyes listen in a sort of trance. The backbone is paralyzed, as the serpent has emerged from its base.

It is one of the sons who reaches on high to cut off the "vicious circle" of the aggressor. This is the breaking of the circle, breaking the inevitable cycle in order to move ahead into the unknown future: from the closed world to the infinite universe.

Greek, Judaic and Christian civilizations have
broken with the circular, static vision, and
entered long ago on the linear course with its
dynamism.
Th. Molnar: Twin Powers, Eerdmans, 1988

Once again, we conjure up Spengler's Faustian vision of adventure and knight-errantry and exploration taken up by Breker.

With these images in mind, Breker develops his own striking attitudes. His bas-relief of heroes and serpents of the new dragon-slayers, is especially memorable. Here the acts of combat and disentangling are identical!

As opposed to the various Laocoon versions, this series breathes success, the fetters having been turned to garlands of victory.

Other sculptures like the Prometheus, the sword bearers, Dionysus, the Herald, even the occasional 'closed' figures with clenched hands (The Contemplative Life) all preach a message of courage and resolution, Man's ability to explore, to create, to save himself and others.

This message of Breker is especially moving and welcome in an era of failure of nerve and loss of confidence prevailing throughout much of the 20th century.

The New York Times critic John Russell has written in "What Happened to Men?" that "man began to run out of manhood;" male decadence set in with a supine yielding to feminism.

Breker's very strong statement (also strengthening to real womanhood) is that European man must maintain his distinction and distinctiveness and nobility, true to the ideal of chivalry and sportsmanship, while woman, in developing her particular genius and spirituality, respects and sympathizes with this virile ideal.

In the future, the space explorer and ecologist, will replace the warrior as a positive symbol. The giant of industry or high finance, the leader of Germany from 1945-1985, has not proved an inspiration to artists and (in spite of Breker's brave and masterful portrait-busts) has provided a very intractable and dull material to shape into art. The cult of profit and selfishness of sedentary life and work have joined to produce a very inartistic type that naturally succumbs to the traps and trickeries of modernism.

At the outset of the 1990's, a return to classicism and heroism is in order, to which there is no better guide than Breker.

The great sculptor breaks the circle of reincarnation and repetition that produces apathy and indolence in a self-perpetuating, self-destroying life-force: the serpent devouring its own tail. But he also pays a debt to a different circle of cosmos, to the circle of Creation with a center and a circumference. This we see in his occasional "closed" sculptures. The Wounded Warrior especially sits exhausted and crouching, while the hands of other statues are closed and drawn in by the rounded contours of the body. But even here the reaching for distance is implied by the "coiled" composition, the knotted musculature, as if about to spring loose. See his magnificent late relief of St. Martin whose sword leaps out to divide the cloak and clothe the beggar. The deed of charity is the true act of prowess, as in Chretien de Troyes or Wolfram's and Wagner's Parsifal.

To return to the "closed" works of art, one can list the very classical "Meditation" showing a very different attitude to the cosmos. It is not 'open' in the position of the arms, in the many Faustian acts of greeting, defying, challenging, smiting, shaping the world around one. Instead the arms close over mind and soul, containing the inner life in mystic silence.

In the closed type, the legs may well be open, or sprawling, in the later Breker sometimes sensual, but are not expressive of the Faustian will. For example I refer to Arno Breker: His Art and Life by B. John Zavrel: sketches such as The friend (p. 140), Mishima V (p. 147), Girl in love (p. 163), Courtesan (p. 148), Pensive girl (p. 150), Dialogue of the girls (p. 135), and others suggestive of the lounger or odalisque. These figures fall into Spengler's "Magian" category characteristic of the orientalizing Hellenistic megalopolis Alexandria, typical of our period, both frenzied and exhausted, experiments of Arno Breker in a more relaxed and Daliesque manner.

Our speculations on the heroic character of Breker's art may help to explain his amazing lack of vulgarity in an Alexandrian age. The tension and movement are too great for sentimental art.

How subtle in all Alexandrian periods including ours, is the temptation of vulgarity! This can be seen in the recently discovered ancient bronzes of Riace--two heroes or gods now enshrined in Reggio Calabria. There is something posed, slick, and loose about the sculptures, perhaps due to the drastic restoration. All illusions of their being Periclean or severe style are long dispelled, since their discovery. If we use the categories developed in this essay, one can say the figures are neither "open" nor "closed" but hover indecisively, the hands without grip, in Magian uncertainty, greatly inferior to Breker's heroic mode.

As the great Oswald Spengler's formulas have been a key to Arno Breker's art, I wish to remind the reader of the Magian idea that is contrasted with the Faustian one. The Magian is mystical, immobile, passive before its Desert Deity, while distracted by urban conglomerates with their attendant luxuries, comforts and dissipations that provoke iconoclastic interiorization. But the Faustian eschews luxuriance and remains, (cf. the late "Alexander,") Breker's most important statement, despite some Magian experiments.

Cutting through the various 20th century cataclysms, through the Götterdämmerung, the bomb, the population explosions and world diseases and mentalism, it allows not only to turn to outer space but recover the inner one in acts of discovery, openness, commanding, creating.