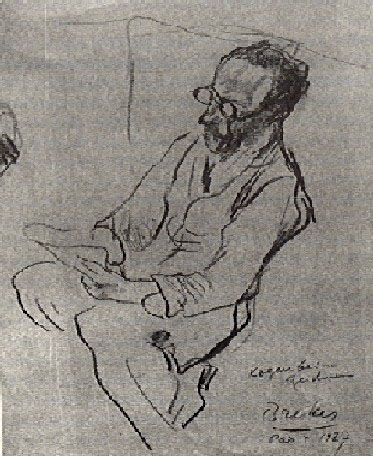 Moissey Kogan in 1927. His friend and sculptor Arno Breker did this drawing in Paris. The original document is to be seen in a retrospective in Germany.

Bremen/Neuss (bc) Art historians in Germany have finally located the name of the Russian-Jewish sculptor Mossey Kogan on a list of deportees to Auschwitz, confirming suspicions that he died in the Nazi death camp. Arie Hartog, curator of a retrospective of Kogan's life work at the Gerhard-Marcks-Haus museum in the northern German city of Bremen, said that new research in archives had discovered Kogan's name on a list of Jews arrested and deported to Auschwitz by the Nazis in 1943.

The information confirms what art historians began to suspect in the 1960s, but had no proof until now: that the sculptor was a victim of the Holocaust. In the late 1940s and 1950s, art historians thought that Kogan had died in Paris, in the Netherlands or in Switzerland. The date of his death has always been listed as unknown. Now art historians place the date of death in 1943.

Kogan (1879-1943 ?) remains little known outside of Europe, although he had secured commissions in Berlin, Zurich and Paris before the outbreak of World War II. The Nazis included his work in 1938 in an exhibit of so-called "degenerate art". A Berlin-based Moissey Kogan Archive is working with eyewitnesses, historians, public institutions and private collectors to register and verify all of his works.

The Clemens-Sels-Museum in Neuss, with its director Dr. Christiane Zangs, opened the retrospective in early September 2002. The retrospective in the Gerhard-Marcks-Museum (Director Dr. Jürgen Fitschen) opens on November 3, 2002 and runs until February 2, 2003. Thanks for both events are due to the curator Arie Hartog, known for his great engagement to support forgotten Jewish artists.