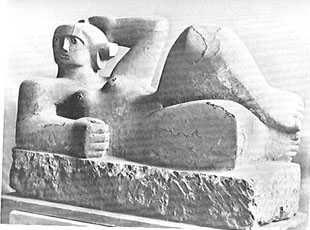 Zürich / Switzerland (bc) Two sculptors, who became very famous in the 20th century met at the international 'Art Exhibition 1931' in Zurich: Henry Moore (*1898) and Arno Breker (*1900). The French-German Arno Breker had the privilege to present four of his works, and the British sculptor Moore showed three works. When they met during this very prestigeou art show of its time in Europe, Breker was 31 years, Moore 33 years. Neither of them knew at this time, what leading artists they would once become.

In an interview in 1978, Henry Moore remembered: "Breker especially liked my Resting Woman".

It was a work, which Moore did four years earlier. The size was 84 x 58 centimetres. Moore offered it for sale for 5,500 Swiss francs. Moore reported: "I asked the young, symphatetic Arno: What fascinates you about this sculpture?"

Breker replied: "It is the power and the inner silence you captured in this work. The sculpture is archaic, classic and at the same time modern. You are a milestone in art of our era."

Moore felt very pleased, as he said. The compliment came from a sculptor whom he admired himself. "In the exhibition Breker had a bronze portrait of a male figure. It impressed me, as well the male and female torsos", said Henry Moore.

At the art exhibition the works of about 50 artists from Europe were shown. They all came by invitation. Many of them had only one work on display, as the German Georg Kolbe and Renee Sintenis. Amongst the artists were also two close friends of Arno Breker: Aristide Maillol and Charles Despiau, as well his famous colleagues Manolo, Henri Laurens, Ivan Mestrovic, Georges Minne, Francois Pompon, Tore Strindberg, Josef Wackerle, Josef Thorak, Fritz Wotruba und Ossip Zadkine.