Präsident Vaclav Havel: A Signal for the World 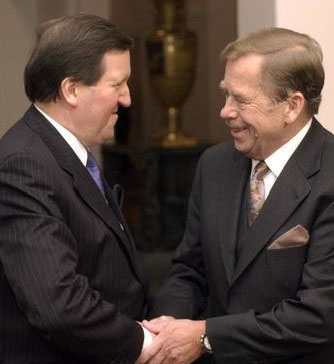 He took care to provide a good atmosphere for the NATO Summit in Prague: The Czech President Vaclav Havel greets the General Secretary of NATO, George Robertson (left) at the opening of the meeting.

Prague/Washington (bpb) After the conclusion of the successful NATO Summit in Prague, the US President George W. Bush has informed the Russian President Vladimir Putin on November 22, 2002 in St. Petersburg about the current plans of the North Atlantic defence alliance. It was a respectful proof of the US President that the enlargement of NATO should not raise any false fears of Russia. The Czech President Vaclav Havel was a successful host in Prague. He also brought together President Bush and the German Chancellor Gerhard Schroeder, after lenghty differences of the past months.

The 19 NATO states have decided on November 21, 2002 in Prague to accept seved additional countries. That was announced by the NATO Secretary General George Robertson. New NATO members are Estonia, Latvia, Lithuania, Slovenia, Slovakia, Bulgaria and Romania. The alliance now has 26 members. It is the second enlargement of the alliance since the end of the Cold War in 1989. Already in 1999 NATO accepted three members of the former Warsaw Pact -- Czech Republic, Poland and Hungary into the alliance.

President Vaclav Havel, the host of the NATO Summit, spoke in one of the first commentaries on the summit of a "clear signal for the whole world".

President Havel gave a reception at the Prague Castle for the high-ranking guests. Bush and Schröders met each other there for the first time since the September elections in Germany, which were marked by the controversy about the war of United States against Iraq, which is widely opposed by people in Europe as unjustified and wrong. Before the banquet, the two politicians are said to have had a 'long handshake", according to diplomatic sources. This is seen as a sign that the "working relations between both countries as as good as before." 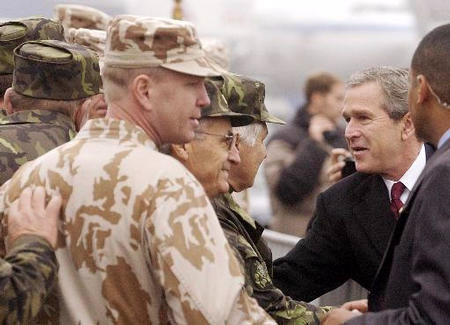 US President Bush says good-bye to the Czech soldiers at the Prague Airport. He flew on to President Putin in St. Petersburg.

No doubt: the US President Bush was the moderator of the summit. He is said to have been "courteous and to the point", according to diplomatic circles. The attendeed were united in further cooperation in the defence against the danger of world-wide terrorism.

At the same time, the German Chancellor Schröder and his Foreign Minister Joschka Fischer stressed their old position: in the event of a new open war against Iraq, there will be no participation of German soldiers invading Iraq's territory. But the German Chancellor indicated continued solidarity with the United States. Schröder did not rule out allowing US military flights over Germany in case of war against Iraq. "We do not intend to limit military possibilities of our friends", said the German Chancellor after the NATO summit. The airspace over Germany remains open for US military flights. The USA can use their military bases in Germany in case of a military action. Schröder pointed out the existing NATO membership status and agreements about the stationing of US soldiers in Germany, by which Germany is bound.

Bush proclaimed on November 21, 2002 in front of journalists in Prague that German is an important friend of USA. "We have a relationship to be maintained, and we will maintain it." Ari Fleischer, the spokesman for Bush said that Bush was happy to exchange pleasantries with Schröder. A formal meeting between Bush and Schröder was not foreseen during the Prague summit.