IN HONOR OF ZEUS - OLYMPIA 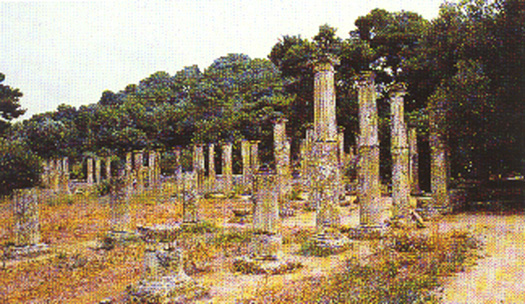 The Palaestra at the ancient Olympia in Greece.

In a few months, the 2004 Olympic Games will be finally held again their homeland, Greece.

The revival of the Olympic games in modern times was due to the efforts of a Frenchman, Baron Pierre de Coubertin. His embalmed heart is enclosed in a glass urn burried at the base of a marble monument near the ancient stadium in the so-called „Woods of Coubertin" in Olympia, Greece.

The first modern Olympic Games took place in the Panatenaic Stadium in Athens in 1896.

In the ancient times, Olympic Games were celebrated every four years during the full moon between late June and early September. Originally, the games took place in a single day. Later, as more games were added, they took place on five consecutive days. Before the start of the contest, a committee of noblemen, who wore olive crowns and heraldic insignia, travelled up and down Greece, announcing the beginning of the sacred truce.

The first day was dedicated to religious and civil rites. The judges, elected from the noblest families, swore to judge according to justice and with absolute impartiality, and the athletes swore to fair play. Only Greeks born of Greek parents were admitted to the games.

The athletes arrived in Elis a month before the games began to train; they competed in the nude and women were not admitted to the games, even as spectators. The games stated with a foot race in the stadium, along its entire length of 192 meters. Over the years, other events were added: the double course, a race running back and forth across the entire stadium; an edurance contest in which the athletes ran the stadium 24 times, wrestling, boxing the pancratium (combination of boxing and wrestling); and the pentathlon: jumping, running, discus and javelin throwing and wrestling. 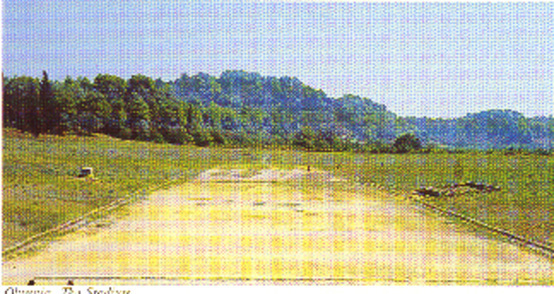 There were also equesterian contests, such as the races of two and four-horse chariots.

The fifth day signalled the end of festivities: heralds proclaimed the victors, who were crowned with a wreath woven from the branches of a wild olive tree. This was the most valued prize.

After their coronation, the athletes made a sacrifice to Zeus, and then festivities and parades were held. During the solemn banquet for the Olympic athletes, a song in verse, accompanied by music, was recited to praise the glory of the victors.

During the Olympic Games, writers, philosophers and artists often exhibited their works to the public.

„They fight not for the sake of money, but for the sake of virtue", wrote Herodotus. The ancient Greeks considered Olympia, the sanctuary and oracle of Zeus, to be „the most beautiful place in all of Greece". It is located in Elis, in a valley rich with pine trees and surrounded by wooded hills, where the river Alpheios flows. The Greeks called it „Altis", meaning sacred woods.

The Altis has an irregular square shape, approximately 200 by 175 meters, and is encircled by a sacred wall. Inside were temples and other religious buildings. Outside this area, there were buildings for civic purposes, as well as others used during the athletic events. Many legends are connected with Olympia.

The institution of athletic competitions is closely related to mythological events. It was at Olympia that Apollo outran Hermes in the footrace, and also defeated Ares in the boxing match. Another legend narrates how Heracles instituted the sacred games at Olympia in honor of his father, Zeus. Splendid games were also started by Oxylos, a king of Doric origin. Centuries later, Iphitos, the king of Elis, was directed by the Delphic oracle to revive the Olympic games. Iphitos established the rules for carrying out the competitive events and the way in which the pilgrims heading to and from Olympia could arrive at their destination without harm from crossing areas involved in continual conflict. Therefore, during the games, the territory of Elis was declared off-limits to armed troops and a „sacred truce" was established.

According to rules set by Iphitos, a single match was played: a simple footrace inside the stadium. The victor of the first Olympic games in 776 BCE was Coroibos, from whom these games took their name. During all of Antiquity, the victor of this race lent his name to the games that were played every four years, and so formed the basis of Greek chronology.

The Macedonian kings also financially supported the sanctuary and promoted the construction of such monuments as the Philippeion, which was commissioned by Philip II, the father of Alexander the Great. Philip himself was the victor of the equesterian race of the Olympic games of 356 BCE.

The Olympic games continued through the Roman era, when they were open to all citizens of the empire. The last Olympic games of Antiquity took place in 393. One year later, the Christian emperor Theodosius I abolished them. In 426, his successor Theodosius II ordered the demolition of all the pagan temples, including the temple of Zeus at Olympia. 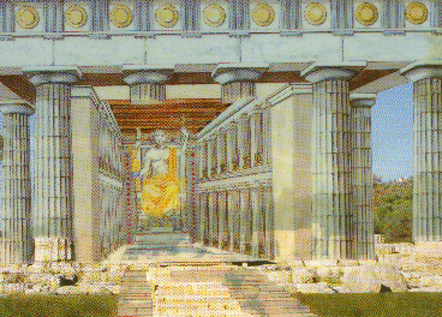 The Temple of Zeus at Olympia. One of the Seven Wonders of the ancient world. Destroyed by the order of a Christian emperor of the Roman Empire, Theodosius II in 426.