The world's oldest civilization was flourishing in Thailand at least 5,600 years ago. 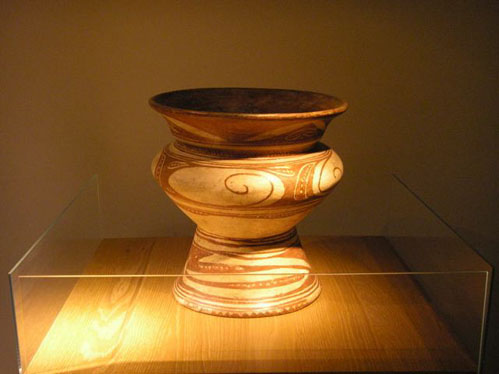 An example of the ancient Ban Chieng pottery from Thailand.

From archaeological evidence, it has been surmised that Ban Chieng hosted an agrarian society whose knowledge of metallurgy was so advanced it produced bronze artifacts sixcenturies befor anyone else-and married bronze and iron to fashion bi-metallic tools and utensils hundreds of years before the Chinese.

Easily accessible only from the southem Gulf-of-Thailand coast and the southeast (present-day Cambodia), the Menam Chao Phya basin was well protected from excessive outside influence and sudden, massive incursions of new settlers.

The widespread variety of pots and scarcity of offensive weapons strongly indicate a stable, peaceful society whose sophistication in metal technology, pottery crafting and plant and animal husbandry would have required at least 2,000 years of prior development.

The origins of the Ban Chieng people remain a mystery and have engendered a great deal of leamed speculation. Some scholars believe they may have come from present-day northem Vietnam, and discovered the bronze-making process after they arrived. Others contend that they were indigenous to the area.

What is certain is that they flourished in the Ban Chieng region because of its fertile soil and gigantic forests that contained abundant fuel and wildlife. Another factor was its gentle weather that both eliminated the need for elaborate housing and permitted year-round farming.

Unhappily, the Ban Chieng people's farming methods were considerably less sophisticated than their metallurgy. Using the primitive and ecologically rapacious method of slash-and-bum, eventual deforestation and resultant soil exhaustion forced them off the northeast plateau - which remains arid and relatively infertile to the present day--and down into the rich Menam Chao Phya Valley to the west.

There they encountered a Neolithic people who first produced bronze around 2,000 B.C. These valley people were most probably an indigenous proto-Malay tribe that later moved southward under pressure from the Ban Chieng people and sub-sequent southward migrations from China.

The Menam ('Mother of Water' or 'River') Chao Phya basin covers most of modern central and northern Thailand and is bordered to the west by rugged Burmese mountains, to the north by lofty mountains separating southern China from the Southeast Asian mainland, and to the east by the high, sprawling plateau settled by the Ban Chieng people.