Painter Roland Heyder with his homage to beauty

The oil painting Graziella after a sculpture by Arno Breker 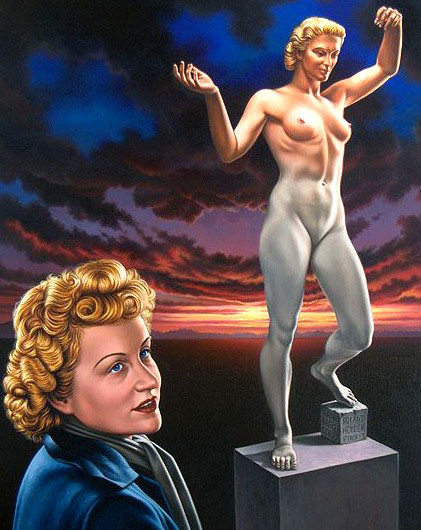 A homage to the beauty of women. The oil painting „Arno--Graziella" by Roland Heyder. The painting belongs to the Collection Hans Steinhauser in Germany.

Solingen/Nörvenich (bpb) The painter Roland Heyder has created, with his oil painting "Arno--Graziella", a homage to the beauty in art. The unusual title is mysterious, just like the depicted figures. Arno stands for the sculptor Arno Breker, whose bronze sculpture „Grace" (original title 'Die Anmut') is depicted in the painting. The beautiful lady with the magnificent hairdo from 1930s has been added as a homage to women. The sculpture "Grace" was for a long time on display in the sculpture garden of the Museum of European Art at the Noervenich Castle near Cologne, Germany.

The painting is 90 x 70 cm large, and was created on the request of an art collector, whose heart beats for the immortality of the classical tradition in art. In Roland Heyder he has found a master of his trade, who "not only wants to paint, but who can paint". The artists, who lives in Germany, was born in 1956 in the town of Singen. He has been working full time as a professional artist since 1980. From 1986 on, Heyder has made many study trips to Asia and Africa. This was followed by an extended tours of the United States (Cleveland, San Francisco, San Diego). The sunny California inspired the painter to many interesting works.

Roland Heyder is, above all, a surrealist. The motifs of his oil paintings remind us of the works of Salvador Dalí. The artist also works as a photographer and lithographer. But the so-called 'life work' of Heyder has not yet been completed. Until now, he has dedicated himself primarily to the depiction of the woman. He has left the world of men for a later time. 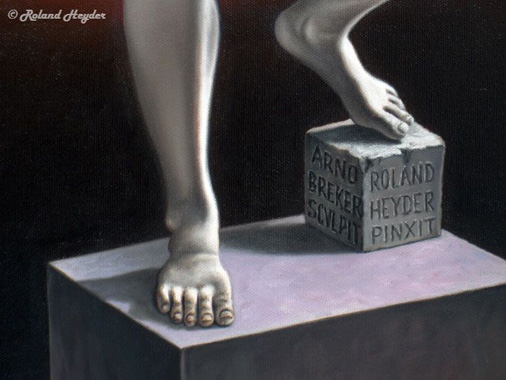 The German painter signs his painting like the old European masters used to do. On the right, on the stand one can read the Latin words: ARNO BREKER SCULPIT (sculpted) and ROLAND HEYDER PINXIT (painted).