Paintings by Hannibal Alkhas on Exhibition 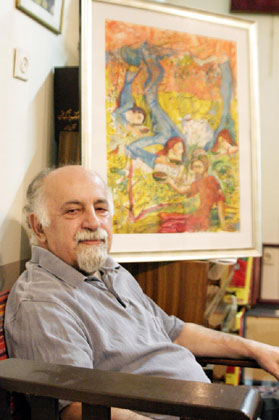 The Iranian artist Hannibal Alkhas still active at the age of 80.

Tehran/New York (meaus) An exhibition of paintings by the Assyrian-Iranian artist Hannibal Alkhas will open in Tehran on June 17, 2009. The exhibit will display 28 tableaux by Alkhas, the initiator of figurative drawing in modern Iranian painting.

The Elaheh Gallery will unveil some of his works which have not yet been shown to the public. "Alkhas has a style of his own, and that makes him significant," said Elaheh Javaheri, the gallery's director.

The 80-year-old Alkhas is a leading painter who has greatly influenced Iranian visual arts. Alkhas was born to an Assyrian family in Kermanshah province. He took up painting at an early age, and has taught the art for 35 years. He has got an MA in visual arts from the Art Institute of Chicago.

Among his prominent works are portraits of famous Iranian poets, including Aref Qazvini. The artist has also translated 150 sonnets by the renowned classical Persian poet Hafez Shirazi into Assyrian.

"Visual arts have made great progress in Iran in the past 30 years. Works by Iranian artists are welcomed at international events," Alkhas said.

Hannibal Alkhas has so far held over 300 group and solo exhibit in Iran and other countries, including Canada, Australia and the United States. The exhibit will run through July 16, 2009.