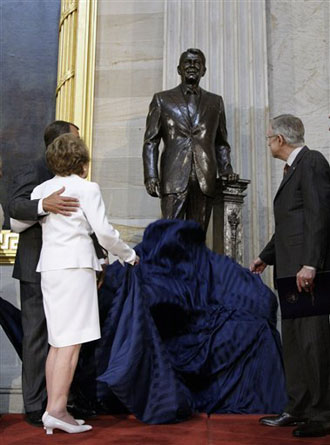 A monumental sculpture of President Ronald Reagan was unveiled in the Capitol, in the presence of Nancy Reagan.

A new statue of former President Ronald Reagan was unveiled at the Capitol today, and Reagan's wife Nancy gave some brief remarks, saying that the statue is a "wonderful likeness of Ronnie" and "he would be so proud."

The former First Lady choked up a bit when she noted that the last time she was in the Capitol was for Reagan's service, and how nice it was to be back under happier circumstances.