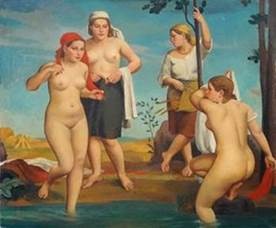 German Art 1930-1945) on auctions in Europe: The sculpture 'Siegfried' by August Bischoff, 'Ernterast' by Johannes Beutner and 'Badende Mädchen' by Robert Schwarz.

Den Haag (bpb) Art-News of interest come from Europe: There is a great demand for German Art (Deutsche Kunst) of the Third Reich. Prices paid for contemporary German art works from the Third Reich have increased rapidly over the last 12 months. In the year 2013 the market was awakened by the sale of a painting by Karl Walther for 23,000 euro. It was an extremely scarce piece as it once hung in the New Chancellery (Neue Reichskanzlei) of Adolf Hitler in Berlin.

It seems now that this was not a one-off occasion. Recently works of other artists popular in the Third Reich have been sold for considerable prices. Amongst the sales were: The heavily damaged painting 'An der Waldquelle' by Ivo Salinger was sold by auction house Michael Zeller for 11,500 euro. The painting 'Ernterast' by Johannes Beutner was sold for 25,000 euro, 'Am Morgen' by Gisbert Palmie for 11,000 euro, 'Badende Mädchen' by Robert Schwarz for 16.000 euro and 'Feldarbeit' by Adolf Wissel brought 6,200 euro at auction house Kastern. A work by Hermann Gradl went for 12,000 euro in a private sale. Sculptures by Georg Kolbe (125,000 euro), Kurt Schmid-Ehmen (100,000 euro) August Wilhelm Goebel (30,000 euro).

A smaller work of Arno Breker (35,000 euro) was quickly sold. The German artist was the favourite Sculptor of Adolf Hitler. In cooperation with the architect Albert Speer he was in charge for the state-building in the capital of Berlin. Breker is the only artist of those time who has a own Museum in Germany ( www.arno-breker-museum.org ) His works are shown in changing exhibitions. (catalogues on request)

Successful sales are also reportet from Bavaria/Germany. A bronze by Fritz Klimsch was hammered down for 75,000 euro at auction house Ketterer Kunst in Munich. Especially art works that were displayed at the Great German Art Exhibitions from 1937 to 1944 are in demand.

Art-Experts say: Only the beginning

"Art-Experts in Germany, France and The Netherlands say: "This is only the beginning". The 'German Art Gallery' in the Netherlands is of the same opinion. The Gallery is concnteating on this period of art. The prices will triple in the coming years. Almost 70 years after World War II, more and more people see this art from a purely historical perspective. Although the art works originate from an extremely tragic period, they should not be hidden or destroyed. This is an opinion shared by several museums, seeing the rising number of exhibitions of this art and the number of visitors. The increasing historical interest in this peculiar art coincides with the ending of the copyright on Hitlers "Mein Kampf" in 2015.

Over the next few weeks a painting by the National Socialistic painter Elk Eber is being offered with a starting price of 17,000 euro. However, most eyes will be focused on the sculpture 'Siegfried' by August Bischoff. The bronze, a huge man of 2.20 meters holding his sword ready, is offered by auction house Andreas Thies for a starting price of 100,000 Euro.

For more information to sell this German Art or to buy German Art you can mail to the Art Gallery via E-Mail bpb-pressebuero1@gmx.de