Lewis Libby indicted by the FBI

Chief of Staff to Richard Cheney indicted for perjury, obstruction of justice and lying to FBI--public trial to reveal the origins, motivation and purpose of the alleged crimes 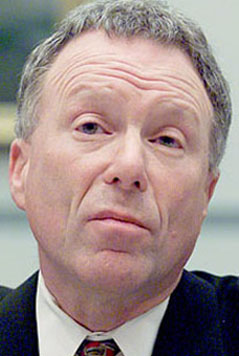 Libby, in his positions of immense power in the White House as Cheney's chief of staff, an "Assistant to the President" , member of the National Security Council, Council on Foreign Relations, Defense Policy Board and the infamous and highly controversial 'Project for the New American Century', was after his boss Richard Cheney one of the leading neoconservatives who instigated the war against Iraq on the false pretext of non-existent "weapons of mass destruction".

The 5 charges of perjury, obstruction of justice and lying to federal officials stem from the CIA's effort to investigate whether the White House claims of Iraq's efforts to acquire yellowcake uranium in Nigeria were true or not. Valerie Plame, a long-time CIA undercover operative in the field of investigating weapons of mass destruction, contradicted the White House assertions. It seems that this incurred the anger of the White House, and Lewis Libby was instrumental in her being publicly outed in the national media as a "CIA operative".

Thus, Richard Cheney's Chief of Staff Libby caused great damage to national security, the CIA and set back the "war on terror". Death threats were received by Valerie Plame against her life, according to her husband, former ambassador Joseph Wilson.

During the 1-hour long press conference on Friday, the special counsel Patrick Fitzgerald was very clear about two things: the investigation was not over, and additional indictment may be coming. And second, while his office was able to ascertain the lies and perjuries of Lewis Libby, he did NOT know his motivation, which is the KEY to the whole matter.

The public trial of Libby, and any other individuals that may be indicted in the near future, will disclose the truth to the American public.