A historical museum for Nörvenich

All citizens from the area are invited to participate 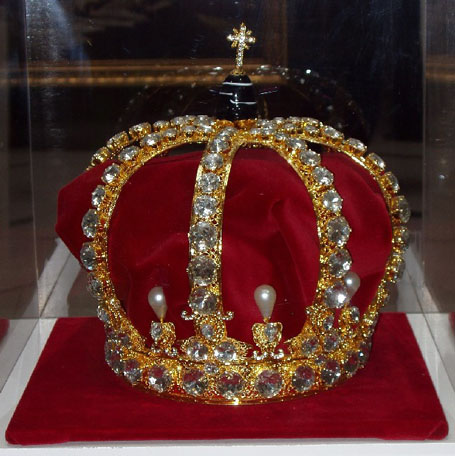 The replica of the last Royal Crown of Prussia from 1701 is an attractive museum piece. Such treasures are not to be found the the Nörvenich area. But the initiators of the Historical Museum are sure of this: with the help of the local citizens, many a worthwhile historical object can be discovered. And such collectibles belong into the Nörvenich Historical Museum.

Nörvenich/Düren (bpb) The town Nörvenich and its surrounding area near Köln in German should have its own historial museum. This idea will be developed primarily as a private initiative by ordinary citizens. The mayor Hans Jürgen Schüller has expressly welcome the project, and promised it the full official support. This puts him on the right side, because many families who lived in the town for generations, have been wishing for just such a historial museum for years. And those who are new residents in this beautiful area, will this way find out, how it looked in the past.

The realization of the project is a long-term endeavor. But already now preparations are being made at the Nörvenich Art Museum and in the European Art Foundation for reaching the goal. To this effort belongs not only the collection of historical objects, but also donations of money, materials and services.

„A historical museum can be assured of a secure and successful future only if the project rests on a sound financial basis", said the speaker for the curatorium, Kurt Arentz. "It is the guarantee that also the future generations will become engaged in the preservation of the cultural heritage of our region, with its customs and the Christian traditions."

It would be a positive development, if the local Duren Bank financially supported this non-profit undertaking. A historical museum in Nörvenich would also be in line with the endeavors of the local politicians Wolfgang Spelthahn (CDU) and Georg Beyss, to bring new cultural life to this part of the county. A successful example to follow is the Art Museum at the Nörvenich Castle, known for its exhibitions of contemporary European artists.

Already now the Historical Museum seeks donations of antique objects of daily use, old photographs and books, maps, machines, etc. which remind us about the life of the people in the past decades and centuries. This appeal is directed above all to the older generation. It is right and sensible to bring old "family pieces" to the Historical Museum. In this way, they will be safe from otherwise a certain end in trash containers.

You can order membership forms to join the circle of friends of the Historical Museum by writing to Museum@europaeische-kultur-stiftung.org