The symbolism of the colors as duty and mission 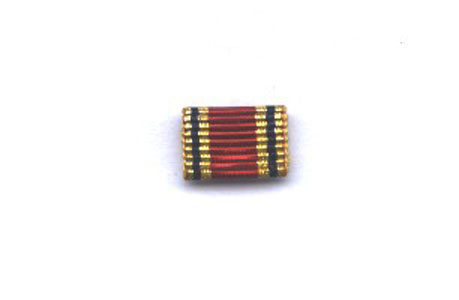 The decoration of the Alexander Order in the colors gold, red and dark blue.

Paris (bpb) The Alexander Order Pour le Mérite for Science and Art awards the above decoration to those personalities who have been named Knights of this intellectual society. The colors were determined by the French writer Roger Peyrefitte during his office as the Grandmaster of the Order. At the selection, the Secret Council--the panel responsible for making the final decision--was unanimous in choosing the symbolically powerful colors, which had been used by Alexander the Great more than 2,000 years ago.

According to the announcement from the Office of the Grandmaster, the Ribbon of the Order has the following colors:

Gold as the color of Divinity and the presence of God.

Red as the color of Blood, Power and Love.

Blue as the color of Loyalty, Water (life), far-away places and the great expanse (the sea).

The Chancellor of the Order, Consul B. John Zavrel explained: „The symbolism of these colors is for those who wear them both an obligation and a mission to work in the spirit of understaning among nations and for peace. 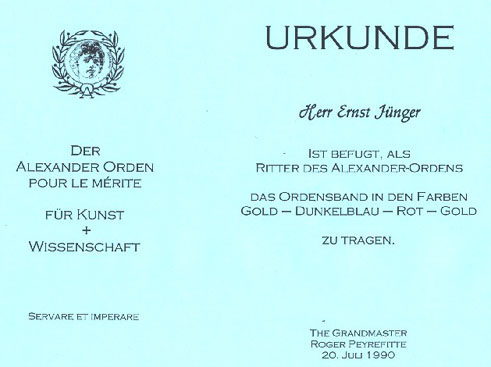 The award document for the writer Ernst Jünger. He had felt the bonds of solidarity with the goals of the Alexander Order even before Roger Peyrefitte proclaimed the renewal of the charitable Order in 1990. 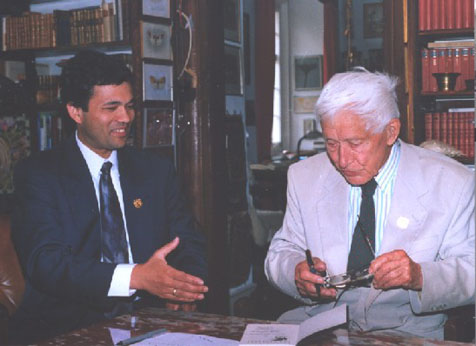 Ernst Jünger in his house with the youthful Knight Marco J. Bodenstein. Both are wearing the honorary pin of the Alexander Order.