The Parties to the Israel-Lebanon Conflict

Vice President of the Academy of Geopolitical Studies, Moscow, Russia

The article excerpted here appeared in Russian on the Marketing and Consulting Information and Analysis Agency web site (www.iamik.ru), Aug. 7, 2006. The English translation was first published in the August 18, 2006 issue of Executive Intelligence Review. 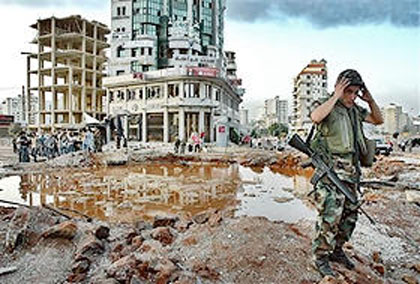 The first days of the invasion of Lebanon by Israel.

The recently flaring Israel-Lebanon conflict is looking more and more ominous, pulling into its bloody vortex practically the entire world community. Fewer and fewer people remain, who blindly believe that the cause of the conflict is to be found in the kidnapping of two Israeli soldiers, and the Israeli Army's attempt to save their lives.

Based on analysis of the unfolding military events, it may be stated that:

* the Israeli armed forces' operation was planned in advance;

* it is multipurpose, and goes far beyond the objective of destroying the Hezbollah movement.

In order to answer the question of what is going on in the Middle East, it is important to identify the main parties behind the Israeli armed forces' operation, their purposes in the operation, and their desired result.

It is absolutely obvious, that Israel would not have dared launch such large-scale operations against Washington's wishes, and without the protection and assistance of the USA. A third party with an interest in the operation is Great Britain (in the person of T. Blair and his team), as a loyal and reliable U.S. ally, as well as a major player in political games in the Greater Middle East.

Nonetheless, these three players are not the primary ones in organizing this bloody drama. In our view, the primary player is the politically shadowy world financial oligarchy, which is working steadily and persistently to change the political, economic, and social organization of the global community, in its own interest. The well-known American economist Lyndon LaRouche calls this force "the world financial bankers' dictatorship."

In the case of the Israeli aggression against Lebanon, the following aims of the primary player can be discerned:

* completion of the defeat of the Westphalia-Potsdam system of international relations [referring to the Peace of Westphalia in 1649, and the 1945 Potsdam Conference -ed.], devaluation of the norms and principles of the United Nations Organization Charter, and discrediting of the UNO. Establishment of a global dictatorship, as well as the unrestrained use of armed force, are impossible without achieving these objectives;

* creation of conditions for strikes against Iran, seizure of Iran's oil and gas fields, and establishment of control over their transportation routes (this also being one of the most important instruments of dictatorship);

* preparations to remake the map of the Greater Middle East, by force.

Among the more particular objectives are the disruption of plans for transforming Lebanon into a stable economic and financial zone in the Middle East--a kind of a central bank for the Arab countries, which would work on completely different terms, than the world financial system does.

The United States (oil and military-industrial capital, which is in power) has been doing the will of the primary party, seeking to achieve a number of particular objectives:

* they have been strengthening their position as world gendarme, along with the role of armed force in dealing with international problems;

* they have been working to provoke a situation for carrying out strikes against Iran;

* they have been preparing for the USA itself to replace the UN Security Council;

* they have been rallying the American public around preparations for new military adventures, while trying to distract people from problems in Iraq and Afghanistan.

Great Britain has an interest in increasing its influence in traditional zones of British political activity, while pushing French interests out of the Middle East.

Israel has increasingly been trying out the role of strike unit for the world financial elite, while laying claim to consolidating its status as an "untouchable" state.

* maintain constant instability in the surrounding Arab countries, as a condition for its own survival;

* eliminate the military capabilities of states and movements that are hostile to Tel Aviv;

* provoke inter-Arab and inter-Muslim frictions and clashes (according to the "divide and conquer" principle);

* shift the attention of the Israeli population from domestic problems, to military operations, in order to strengthen the regime of E. Olmert;

* defeat and discredit radical Islamic movements (Hamas, Hezbollah), which have been gaining in political weight;

* satisfy the demands of Israeli military men for increased defense spending, and strengthen the position of the Army in Israeli society.

Lebanon and the Hezbollah organization are more the recipients of, than players in the launching of the large-scale Israeli operation. True, Lebanese society and the government had reached consensus on the following points:

* liberation of Israeli-occupied land in southern Lebanon (the Shabba farms);

* freeing of hundreds of Lebanese, who are languishing in Israeli jails;

* humiliation of the Israeli aggressor.

In the context of the dramatic events in the Middle East, international and Russian media mention Iran and Syria, as parties with an interest in unleashing Israeli aggression against Lebanon. The former supposedly wants to deflect attention from its own nuclear program and the transfer of the Iranian nuclear dossier to the UN Security Council. Syria supposedly hopes to avoid being punished for the death of R. Hariri.

I submit that, besides Lebanon, Iran and Syria have a greater interest than anybody else, in maintaining stability and peace in the Middle East. Both of these countries have been targetted by the American-Israeli military leadership, and have a realistic evaluation (better than that of Saddam Hussein) of the correlation of forces and the consequences of possible military strikes against Tehran and Damascus. And while a ground operation may not yet be a threat for Iran, it is a very real one for Syria. It is also obvious that the case of Iraq shows, more than convincingly, what comes after that. Therefore the foreign policy actions of these two countries have been very carefully considered and cautious in the recent period.

Without a doubt, Tehran and Damascus support Hezbollah, both as a front-line unit for restraining Israel, and as a powerful Shiite-Alawite branch of Islam. Therefore it is not in their interest, to subject Hezbollah to a powerful Israeli military strike. Even during the Israeli aggression, they have exhibited restraint in extending any military assistance to the Hezbollah armed units.

Concerning Hezbollah: in the current situation it is important for the USA, Great Britain, and Israel to represent it to the world community as a terrorist organization, and to legitimize the Israeli aggression, and support of it, as part of the fight against international terrorism.

Hezbollah emerged as an armed organization, with up to 5,000 men in its units, in 1982, for the defense of the residents of southern Lebanon, and to fight against the Israeli occupation of Lebanese territories. After the Israelis killed the former leader of Hezbollah, Sheikh Abbas Moussawi, in 1992, Hassan Nasrallah took charge of the organization. Upon his assuming leadership, Hezbollah began to be transformed into a political and social movement, with a military wing, and today it has 14 representatives in the Lebanese Parliament, as well as two ministerial chairs in the government.

The movement not only has the support of over one million Lebanese Shiites, but there is also a trend for its influence in Lebanese political life to increase. Therefore war with Israel is not in the interests of Hezbollah. Especially in view of the fact that a truce has existed between it and Tel Aviv since 1996.

Hezbollah has now become the generally acknowledged center of Lebanese resistance to the aggressor. Its military successes have substantially enhanced its political status not only in Lebanon, but throughout the Islamic world. 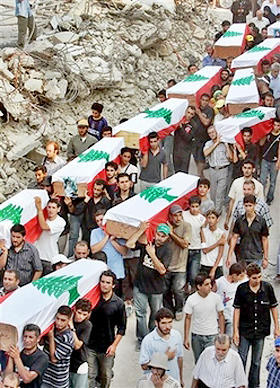 It is too early to say who has achieved what, in the Israel-Lebanon conflict. There are only some interim results.

Hezbollah has most likely strengthened its positions not only within Lebanon, but across the entire anti-Israel front. It has proven its viability under fire from superior forces. It has engaged in three types of combat (for the first time in the history of Israel-Lebanon conflicts): on land, at sea, and in the air, and has inflicted palpable damage on the enemy for the first time.

Israel has failed to demonstrate overwhelming military power, to defend its population from missile attack, or to break Hezbollah's resistance. The only success has been to destroy vital infrastructure for the population, several administrative centers, residential houses, and the weak infrastructure of the Lebanese Army. Thus its main success has been achieved against the civilian population and civilian targets.

Together with the United States, Tel Aviv has succeeded in "taking out" the UN Security Council, turning it into a shield for its aggressive policy.

The new war has not consolidated the Arab and Islamic world, nor has it irretrievably divided it. On the one hand, we see that Muslims all over the world are in solidarity with the people of Lebanon, but, on the other, they heeded the call of the spiritual leader of the Wahhabites, Sheikh Abdullah Bin-Jubreen, not to support the Lebanese Shiites, not to help Hezbollah, and not to pray for its victory.

Neither the USA nor Israel has succeeded in creating conditions for strikes against Iran. Arguments like "Iran is helping Hezbollah" are failing to receive serious public support in America, not to mention the international community. Moreover, the USA got a serious slap in the face from the Lebanese government, which refused to receive Secretary of State C. Rice in Beirut.

Israel is not succeeding in toppling the Hamas government in Palestine, while the operation against the Palestinians and the Lebanese has not brought about solidarity on the part of the Israeli population with the E. Olmert government. If the conflict drags out, the problems of Israeli refugees, the deaths of civilians, and their sitting in camps and bunkers may lead to an explosion in Israeli itself.

And so, what will the primary parties to this aggression decide to do: to be satisfied with the results of the operation, or to pursue military operations to a victorious conclusion? If it is the latter, then the world is on the threshold of a big war in the Greater Middle East, the consequences of which will be extremely grave for the whole world.