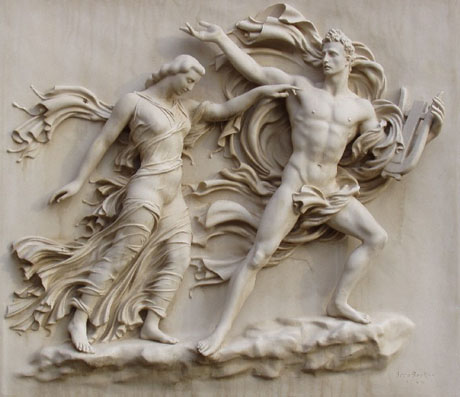 "Orpheus and Eurydice", a relief from 1944 by Arno Breker. This masterpiece reminds of our historical heritage and the Greek mythology. But Breker created this motive with models of his time. He usually chose healthy and good-looking young people as his models.

Barcelona (bpb) The famous Fundació Caixa Catalunya in Barcelona presents the most interesting exhibition with the title „La música y el III. Reich: de Bayreuth a Terezin". This exhibition brings together paintings, objects, fine art, and documents. This show "The third Reich and Music" informs about the situation during the years between 1930 and 1945, the end of the Second World War. This extraordinary show was organized in collaboration with the Musée de la Musique in Paris. Curator Dr. Pascal Huynh arranged the first exhibition of this kind in France in 2004.

The exhibition located at La Pedrera, Passeig de Gracia, 92 08008 Barcelona. Open from 10 am to 8 pm. An exhibition-Cataloguecan be ordered at www.fundaciocaixacatalunya.org . The exhibition ends on May 27, 2007.

On display are two master pieces by the sculptor Arno Breker: the portrait Richard Wagner in bronze, and the relief "Orpheus and Eurydice" in art-marble. This work was completed in 1944, shortly before the end of the war.

The exhibition goods came from the Staatliche Museen Berlin, The European Art Foundation, the www.museum-arno-breker.org and from other international institutions. Private collectors supported the exhibition with materials which have not been shown in public for more than 60 years.

The concept of the exhibition, as envisioned by Pascal Huynh, is to show this exhibition in different countries. It was already seen at the Hardenberg Castle near Berlin. More information can be obtained from their website at www.schlossneuhardenberg.de

It is to be said: The Fundacio Caixa Catalunya was very fortunate to get this presentation to be shown first in Spain. At the same time, this foundation is a pioneer in modern exhibitions in general. It is expected that other foundations, such as the Fundacao Berardo in Portugal, will follow to present this show in their country. No doubt: the exhibition would also be very attractive to the people in Japan and USA.

In the West and East, the young generation is highly interested in what had happened in Germany in Hitler's time in architecture, literature, theatre, art and music. The political situation during that time in Europe is widely known. Pascal Huynh, the musicologist and author of "La musique sous la république de Weimar", the publication "Kurt Weill ou la conquete des masses" and the music editor at the Cité de la Musique in Paris says: "We want to inform the public about the facts and about political constellations. Everybody should be free to form their own opinion. This is what a democratic society means."

Alex Susanna, Director of the Fundacio Caixa Catalunya, announced already in 2006: "In view of the success of this exhibition in Paris, we are proposing to present it in Barcelona in our exhibition rooms in La Pedrera, designed by the architect Antoni Gaudi." The Foundation has over the years presented a number of shows in its exhibitions rooms in the piano nobile of La Pedrera, one of the masterpieces by Gaudi.

In the past, shows were dedicated to Arno Breker's friends Salvador Dalí and the US artist Isamu Noguchi, a modern sculptor with Japanese roots. Breker was one of the witnesses, when Noguchi got married in Paris. Also the painters Giacometti, Chillida, Nolde, Dürer and Kandinsky were honored with exhibition at this place.( 10.03.07)