An unusual personality of international renown 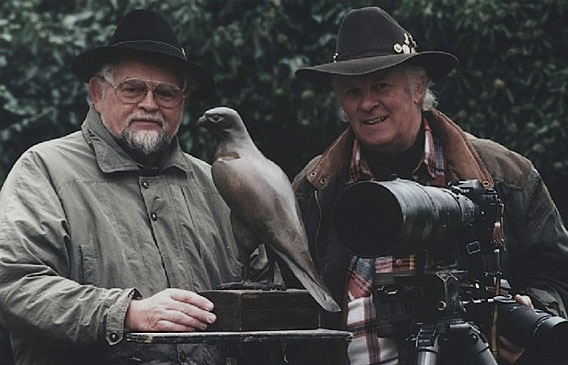 Horst Niesters (right) with his camera and his artist-friend Kurt Arentz. The sculptor modelled the bronze falcon after a live one from the Wildlife Preserve Hellenthal.

Berlin/Hellenthal (bpb) The German Horst Niesters will experience on April 21, 2007 a very unusual day with 3 anniversaries: it is his 70th birthday, he looks back on 50 years of his work as a photographer of wildlife, and on his activities for 40 years in the Wildlife Preserve Hellenthal in Germany. The accomplishments and merits of this unusual man have been fittingly described by Consul B. John Zavrel, the Director for International Relations of the EKS: „Horst Niesters is an unusual personality of international renown."

It is simply impossible to adequately describe in a short report the various accomplishments and the wide diversity of Horst Niester's merits in the society, as well as for the society. Horst Niesters was born on April 21, 1937 in Cologne, that is just one year after the famous 1936 Olympic Games in Berlin. Thus he is at the same time a child of the Second World War, and after 1945 he has belonged to that generation of Germans who have rebuilt the destroyed country. Very early he began to record with a camera the life around him. Already in 1956, as a young photographer he had achieved such a level that even leading magazines and newspapers published his photos. Up to now, he has had some 5,000 photographs published, and has participated as co-author in the publication of 51 books. He has created more than 40 calendars on the themes of hunting and Nature. He took more than 450,000 photographs and travelled nearly all the continents.

Prominent personalities from politics and business have given their patronage of his exhibitions, among them were HRH Prince Rainer of Monaco, Prince Bernhard of the Netherlands, King Hassan II of Marocco, and Sheik Zayed bin Sultan Al Nahayan, the President of the United Arab Emirates.

In Germany, Niesters was honored by exhibitions under the patronage of the German presidents Walter Scheel, Carl Carstens and Roman Herzog. The were joined by Presidents of the German Parliament Eugen Gerstenmeier and Prof. Dr. Rita Süßmuth as well as the German Chancellor Helmut Schmidt and Helmut Kohl. Among the top government officials were the Foreign Ministers Hans-Dietrich Genscher and Klaus Kinkel. Other ministers were Franz-Josef Strauß, Josef Ertl, Ignaz Kiechle, and J.W. Möllemann. International recognition came even from several US presidents. Niesters had dialogs among others with the NATO Secretary General Manfred Wörner, the animal filmmaker Prof. Heinz Sielmann as well as the US Ambassador Richard Burt. To his friends belongs the sculptor Kurt Arentz, a master sculptor of animals.

An expert on birds of prey and falconry

As a falconer, Horst Niesters came to the town of Hellenthal in April, 1967, and founded a breeding station of birds of prey, which has in the meantime become known far beyond Germany. He was a consultant for the filming of many TV series. Among them „In the Hunting Grounds", „Noiseless Hunt", „A Hunting Day with the Prince Clemens August" and „Crowns, Experts, Knights." More than 40 TV reports, 200 radio programs and 1,600 press releases have reported on his activitites over the years.

His engagement for the protection of Nature and wildlife brought him much recognition for his successful breeding of the official bird in the American coat-of-arms: the Bald-headed Eagle. From these, in 1982 a pair was presented to the US President Ronald Reagan as an official gift from Germany. His successes as a breeder have been praised in personal letters from the US Presidents Ronald Reagan and George Bush. These days, several kinds of birds are pretected in Hellenthal from dying out. 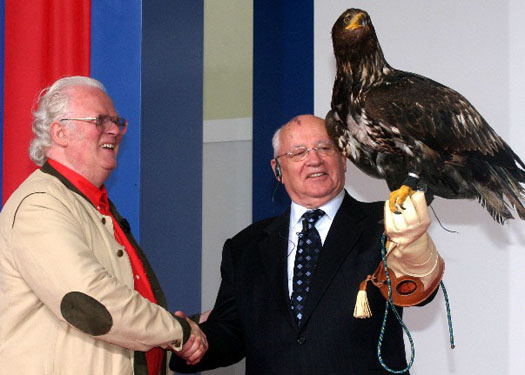 Horst Niesters (left) with Michael Gorbatchev, the former Russian president. The photo was taken at ceremony of the 'POINT ALPHA AWARD' in Germany. Gorbatchev has on his arm an eagle which was raised by Niesters in his 500-acres wildlife preserve Hellenthal.

Beside numerous honors and awards, such as honorary membership in the Association of German Falconry, the academic hunting asscociation Hubertia Aachen and the appointment as the Chief Falconer, Horst Niesters also received his highest Arabian decoration in the award of the "Golden Dagger" by the President of the United Arab Emirates, Sheik Zayed bin Sultan al Nahayan on the occasion of the World Congress of Falconry in Abu Dhabi in1976.

For the German Minister of Agriculture, Niesters put together the exhibition on the theme '1,000 Years of Falconry'. This was followed by many exhibitions and presentations for the German-Arab Society, the Asil Cup, the International Hunting Council for the Preservation of Wildelife CIC, the German Hunting Association, the Asscociation for the Protection of Nature and Wildlife, the German Hunting and Fishing Museum in Munich, the Nature Museum König in Bonn, and the International Exhibition of Wild Animals and Ecology in Nürnberg, to mention only a few.

More international recognition came from his exhibition on the theme 'Falconry 2000' in Berlin, which gave an insight into one of the oldest hunting arts to a world-wide audience.

Niesters updated the best-known German book on falconry by Renz Waller 'The Wild Falcon Is My Companion' (first published in1936), and illustrated the new edition of probably the oldest book on falconry from the 8th century, 'The Falcons' by Khalif Al-Gitrif. Also in the book 'The Hunt', which has been published in five languages (including English) he addressed the theme of falconry as well as 'hunting' with a camera. From his pen, there are numerous articles in various books and magazines. His expert writings and reports are in great demand in Germany and abroad.

Knight of the Alexander Order

To the most recent honors for Horst Niesters belongs the admission as Knight into the International Alexander Order Pour le Mérite for Science and Art, which had been renewed in 1990 by the French writer Roger Peyrefitte. During the ceremony at the Order's castle of Noervenich near Cologne in Germany, the Grandmaster Dr. Wilson Greatbatch (USA) made known that "With his engagement, Horst Niesters has accomplished much for the protection of nature and wildlife. In his work as a photographer he has created unmistakable photo documents and set new standards. With this he has contributed to the spirit of international undestanding among people".