'US ready to strike Iran on Good Friday' 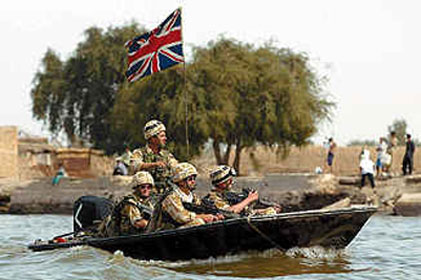 Brits provoke Iran: 15 British soldiers entered the territory of Iran in an effort by the Blair government to extend the Iraq war into another country.

Jerusalem/London. The United States will be ready to launch a missile attack on Iran's nuclear facilities as soon as early this month, perhaps "from 4 a.m. until 4 p.m. on April 6, 2007" according to reports in the Russian media on Saturday.

According to Russian intelligence sources, the reports said, the US has devised a plan to attack several targets in Iran, and an assault could be carried out by launching missiles from fighter jets and warships stationed in the Persian Gulf.

Russian news agency RIA Novosti quoted a security official as saying, "Russian intelligence has information that the US Armed Forces stationed in the Persian Gulf have nearly completed preparations for a missile strike against Iranian territory."

The Russian Defense Ministry rejected the claims of an imminent attack as "myths." There was no immediate response from Washington.

The reports come as the Iranian chief of staff, Hassan Fayrouz Abadi, was quoted on Saturday by Iran's Fars news agency warning leaders of Arab countries that Israel plans to open a "suicidal attack" on its neighbors this summer, to "prevent the withdrawal of the US troops from Iraq and the area."

"I warn the dear leaders and Muslim brothers in the neighboring countries of the occupied territories that this suicidal attack of the Zionists is threatening them," he said.

The countries in danger, he said, were "Lebanon and Syria, and later Egypt, Jordan and Saudi Arabia."

Russian Foreign Ministry spokesman Mikhail Kamynin urged the two sides to provide the United Nations with their own assessments as to what happened and where exactly the detention occurred so that the body could conduct an independent probe. "We hope these actions will provide a foundation for the soonest possible resolution of the crisis," Kamynin was quoted as saying by the Interfax news agency.

"The British occupier forces did trespass our waters. Our border guards detained them with skill and bravery. But arrogant powers, because of their arrogant and selfish spirit, are claiming otherwise," IRNA quoted Ahmadinejad as saying during a speech in the southeastern city of Andinmeshk.

The European Union grappled with a double bind over Iran Saturday--the country's nuclear program and its seizure of the British troops--and reported no progress on either issue.

A debate about Iran's nuclear ambitions had been scheduled as a key agenda item but "was overshadowed to a certain extent by the issue of the sailors and marines," German Foreign Minister Frank-Walter Steinmeier said after hosting a two-day EU foreign ministers meeting in Bremen, Germany.

The Foreign Ministry in Iran dismissed the EU's "biased and meddlesome" comments on the captured troops, saying the dispute solely involved the governments of Iran and Britain.

"We encourage Iran to peacefully resolve this issue," she said. "We continue to express our willingness to engage in dialogue and discussions with Iran. That is very much in the best interest of our people and that is our foremost concern. I think everyone regrets that this position has arisen. What we want is a way out of it."