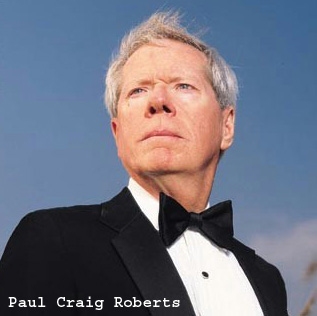 Dr. Paul Craig Roberts is a former associate editor of Wall Street Journal, columnist for Business Week, and professor of economics. He served on personal and committe staffs in the House and Senate, and as Assistant Secretary of the Treasury for Economic Policy during the Reagan Administration. He speaks with an authority bred of experience.

Anyone who doesn't believe that the US is an incipient fascist state needs only to consult the latest assault on civil liberty by Fox News (sic). Instead of informing citizens, Fox News (sic) informs on citizens. Jason Ditz reports (antiwar.com December 28, 2010) that Fox News (sic) "no longer content to simply shill for a growing police state," turned in a grandmother to the Department of Homeland Security for making "anti-American comments."

The media have segued into the police attitude, which regards insistence on civil liberties and references to the Constitution as signs of extremism, especially when the Constitution is invoked in defense of dissent or privacy or placarded on a bumper sticker. President George W. Bush set the scene when he declared:  "you are with us or against us."

Bush's words demonstrate a frightening decline in our government's respect for dissent since the presidency of John F. Kennedy.  In a speech to the Newspaper Publishers Association in 1961, President Kennedy said:

"No president should fear public scrutiny of his program, for from that scrutiny comes understanding, and from that understanding comes support or opposition; and both are necessary.  . . .  Without debate, without criticism, no administration and no country can succeed, and no republic can survive. That is why the Athenian law makers once decreed it a crime for any citizen to shrink from controversy. And that is why our press was protected by the First Amendment."

The press is not protected, Kennedy told the newspaper publishers, in order that it can amuse and entertain, emphasize the trivial, or simply tell the public what it wants to hear. The press is protected so that it can find and report facts and, thus, inform, arouse "and sometimes even anger public opinion."

In a statement unlikely to be repeated by an American president, Kennedy told the newspaper publishers: "I'm not asking your newspapers to support an administration, but I am asking your help in the tremendous task of informing and alerting the American people, for I have complete confidence in the response and dedication of our citizens whenever they are fully informed."

The America of Kennedy's day and the America of today are two different worlds. In America today the media are expected to lie for the government in order to prevent the people from finding out what the government is up to.  If polls can be believed, Americans brainwashed and programmed by O'Reilly, Hannity, Beck, and Limbaugh want Bradley Manning and Julian Assange torn limb from limb for informing Americans of the criminal acts of their government. Politicians and journalists are screeching for their execution.

President Kennedy told the Newspaper Publishers Association that "it is to the printing press, the recorder of man's deeds, the keeper of his conscience, the courier of his news, that we look for strength and assistance, confident that with your help man will be what he was born to be: Free and Independent."  Who can imagine a Bill Clinton, a George W. Bush, or a Barack Obama saying such a thing today?

Today the press is a propaganda ministry for the government. Any member who departs from his duty to lie and spin the news is expelled from the fraternity.  A public increasingly unemployed, broke and homeless is told that they have vast enemies plotting to destroy them in the absence of annual trillion dollar expenditures for the military/security complex, wars lasting decades, no-fly lists, unlimited spying and collecting of dossiers on citizens supplemented by neighbors reporting on neighbors, full body scanners at airports, shopping centers, metro and train stations, traffic checks, and the equivalence of treason with the uttering of a truth.

Two years ago when he came into office President Obama admitted that no one knew what the military mission was in Afghanistan, including the president himself, but that he would find a mission and define it. On his recent trip to Afghanistan, Obama came up with the mission: to make the families of the troops safe in America, his version of Bush's "we have to kill them over there before they kill us over here."

No one snorted with derision or even mildly giggled. Neither the New York Times nor Fox News (sic) dared to wonder if perhaps, maybe, murdering and displacing large numbers of Muslims in Iraq, Afghanistan, Pakistan, and Yemen and US support for Israel's similar treatment of Lebanese and Palestinians might be creating a hostile environment that could breed terrorists. If there still is such a thing as the Newspaper Publishers Association, its members are incapable of such an unpatriotic thought.

Today no one believes that our country's success depends on an informed public and a free press. America's success depends on its financial and military hegemony over the world. Any information inconsistent with the indispensable people's god-given right to dominate the world must be suppressed and the messenger discredited and destroyed.

Now that the press has voluntarily shed its First Amendment rights, the government is working to redefine free speech as a privilege limited to the media, not a right of citizens. Thus, the insistence that WikiLeaks is not a media organization and Fox News (sic) turning in a citizen for exercising free speech. Washington's assault on Assange and WikiLeaks is an assault on what remains of the US Constitution. When we cheer for WikiLeaks' demise, we are cheering for our own.