Sales will open for exhibition on January 15, 2011 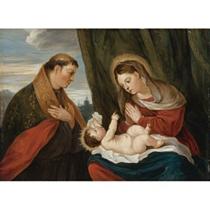 Sotheby's auction of Important Americana will be held on January 21-22, 2011 in New York.

Day two of the sale begins with a selection of stoneware assembled by Mr. and Mrs. Edwin Hochberg, featuring 103 pieces that have not been seen in public in over 20 years, and continues with furniture, folk art and carpets, led by An Important Searls Family Chippendale Highly Inlaid Cherrywood and Mahogany Chest of Drawers, Attributed to Nathan Lombard, Sutton, Massachusetts, circa 1800 (est. $250,000 to $ 700,000).

Sotheby's Americana Week sales continue with the dedicated auctions of Important Americana from a Private Collection in the afternoon of January 22, 2011, which features American furniture and clocks, Paktong and English pottery, and Property from the Hascoe Family Collection: Important American and English Furniture, Fine and Decorative Arts on Sunday, January 23, 2011.

All Americana Week sales will open for exhibition at Sotheby's York Avenue Galleries on January 15, 2011.

Joseph Jefferson was a great American actor who became enormously popular in the second half of the 19th century.

Another highlight of the silver on offer is An American Silver, Copper, and 'German Silver' Scale Model of Independence Hall, John Dean Benton, Philadelphia, 1875.