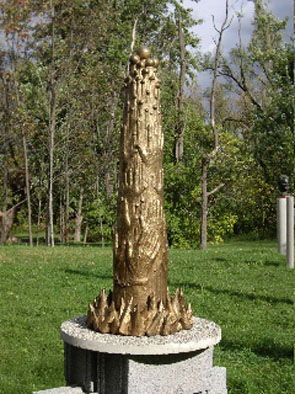 Mrs. Stendar-Feuerbaum and Consul Zavrel at the Noervenich Castle. The photo shows her sculpture 'Ode to Peace' in the Alexander Sculpture Garden in Clarence, New York.

Hamburg/New York, March 2020: (prom) We have heard the sad news about the passing of the German artist Frau Renate Stendar, at he Biblical age of nearly 100 years. This hapened at the end of February 2020. I have known her for many, many years. We had close, friendly ties through art. So, as an eyewitness of her artistic work, I would like to send a last greeting with my recollections.

Frau Stendar was one of the great supporters of the Museum of European Art in the United States of America. I remember very vividly our last personal meeting at the Music School  of the Hungarian composer Lajos Tar at Nörvenich in 2007, my last visit to Germany. At the time, I came to Germany to inform some of our German artist-friends about the planned opening of the Sculpture Garden of Alexander the Great.

We have talked in length about her youth and her life in tragic years of the Second World War, her impressive career in the theater and her marriage to the actor Wolfgang Stendar and their life and work in Switzerland. In her later years she started to paint and then ventured into sculpture.

This was actually why we met that day: I explained to her the concept of out Alexander Sculpture Garden, and invited her to join other artists to donate some of her sculptures to our project. She said yes at once, and we went on and selected several of her unique and expressive bronze sculptures and reliefs.

At the time, there was a large exhibition of her works--both paintings and bronze sculptures at the Museum Europåische Kunst at the historical Castle Schloß Nörvenich. She took me personally on a tour of her works, discussing them in detail and making photos for our archives.

The Alexander Sculpture Garden was opened the following year, in the autumn of 2008 in the presence of artist-friends and supporters from Europe and the United States. Among them were Dr. Wilson Greatbatch, the inventor of the implantable pacemaker and the Grandmaster of the Order of Alexander the Great; the prominent Buffalo businessman Frank McGuire, gallery owner Marco John Bodenstein from Bonn, as well as John Gilbert Bodenstein from the Nörvenich Castle near Cologne. To our great disappointment, the German sculptor  and our good friend Kurt Arentz was not able to come for sudden health concerns, as was also the case with Frau Stendar.

On the behalf of the Museum of European Art and the Order of Alexander the Great, I would like to express our condolences on the passing of this great artist, supporter and friend.  She will remain in our heart and memory!