Exhibition "All About Eve" by Dasa Bausova 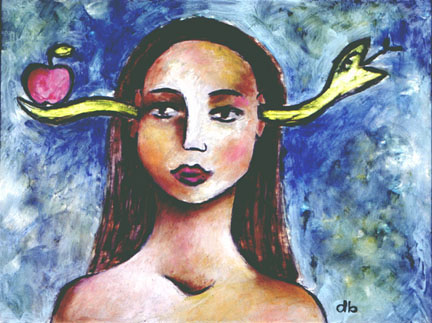 'Processing' by Dasa Bausova, one of the works shown this summer in Colorado.

The recent exhibition of the works by the painter Dasa Bausova in Carbondale, Colorado titled "All About Eve" found a very positive response from the public. In her works she presents images of Eve surrounded by highly symbolical objects--apples, trees, serpents--alluding to the myth of the Jewish Bible. "Eve's decision to bite the apple was the most important decision made in the Judeo-Christian history," she said. "She shaped the fate of humanity, in symbolic terms."

Dasa Bausova did not grow up in a religious atmosphere. She was born in the former Czechoslovakia, then a Communist dictatorship that terrorized the people of the country and among other things did not allow freedom of religion. The official position was that "religion was for the feeble-minded, that it was the opiate of the masses." And if young people were to go to church, they would have problems in school and not allowed to study at universities. So mostly only old grandmothers in the villages would go to church.

Also some members of Dasa Bausova's family were persecuted by the Communists for political reasons. So in the early 1980s she and her family decided to escape from their native country, like many others at that time. They were among the fortunate ones, and managed to escape to Austria, while on a tour in Yugoslavia. And finally they came to America. 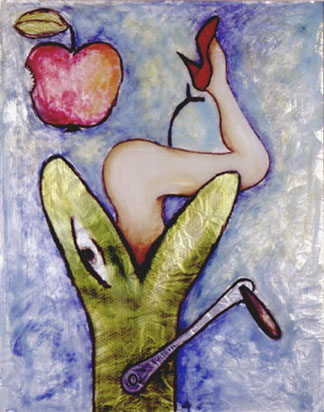 'Censored' by Dasa Bausova, from the cyclus ALL ABOUT EVE.

Although Dasa had very little exposure to religion in her native country, she was fascinated by it. "I didn't have that concept ingrained in me, so I had to study it on my own, and form my own concept", she said.

In the United States, she began to read the Bible, and later on also some of the ancient Hindu texts. "In those texts, the concept of sin emerged from archery, and simply meant to be off target," she said. "I think we experience this every day, as we make decisions that take us off the path of where we need to go," she said. "Every day we all struggle, directly or indirectly, with sin. We all face daily many seemingly insignificant decisions. And that is what this exhibition is really about, this internal struggle, this continuing internal process." 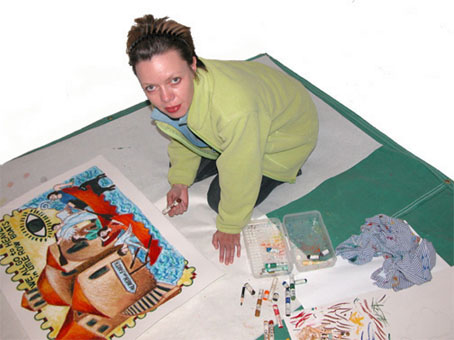 The painter Dasa Bausova at work in her studio in Colorado.