The largest bust of the Dalai Lama

Museum Europäische Kunst shows its appreciation of the Buddhist leader 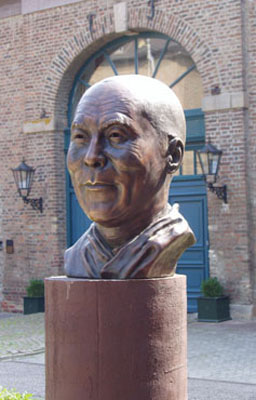 The portrait of H.H. the XIV. Dalai Lama of Tibet. The great artwork is seen at the Museum of European Art at Noervenich Castle in Germany. Millions of people in Europe and USA admire this religious leader.

Berlin/New York (bpb) The Dalai Lama has now experienced a special honor: an artistic portrait-bust. It is located in Germany, in the Museum Europäische Kunst at the Noervenich Castle near Köln. „So far, it is the largest bronze bust of the Tibetan leader", says John G. Bodenstein, the president of the European Art Foundation Berlin. „This way, we have set up a monument for the Nobel Peace Prize winner and spiritual leader of the Buddhists", says Bodenstein. The Buddhist leader, who lives in exhile in India, is a worthy representative of this philosophy.

It is a fact that the Dalai Lama has time and again found new ways to work for human rights, peace in the world and the welfare of all people. „From the oppression of the Tibetan people by the communist regime of China, I know personally the suffering and understand how important is the engagement for human rights", said the Dalai Lama during his visits to Germany and USA. The Dalai Lama, who describes himself as „a simple monk", has already a long time ago on his pilgrimages to the West won the sympathies of American politicians. The Hollywood star Richard Gere is one of the personalities who have the courage to officially speak up about the plight of the Tibetans. Gere also helped arrange official meetings between the Dalai Lama and American presidents. Peking considers any kind of public recognition of the Dalai Lama as a provocation against China.

During the 50 years of his exile, much has changed for the Dalai Lama. He has a new generation of advisors and political assistants, who are organized in the Western style. And accordingly, there are also demands of the protocol on His Holiness. Critics complain that he is too much guided and scripted. The officers of his court have Western manners and methods, and have too much influence on the Dalai Lama.

Fortunately, this negative aspect is again and again offset by the natural ways of the Dalai Lama, and his gentleness. At public events, interviews and meetings, one hears him often laugh in a high voice, just the way he used to do as a young man of 21 years.

Through his opennes toward the West, his dialog with the Catholic Church and the Popes as well as throught his religious lectures, it is the Dalai Lama achievement that Buddhism has become to be taken seriously as a philosophy, both in the USA and the Western world. But is is always regretful, that the Dalai Lama on his journeys visits primarily the large cities, convention centers and mass events. Yet he has many invitations to come also to the country. "In the country and in solitude, one hears the pulse of eternity", says an old Tibetan proverb. The Dalai Lama has become a world travelers. In the year 2006 he will again set off on a great journey. Also the United States anda visit to Buffalo are in his travel plans. (10.09.05)