Speech of Consul B. John Zavrel

at the opening of the exhibition "The Miracle of Creation"

at the Museum of European Art in Clarence, New York 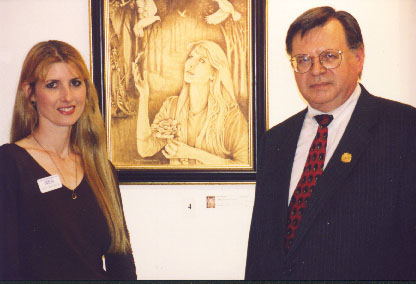 Consul B. John Zavrel and the painter Mary McAndrew at the opening of the exhibition "The Miracle of Creation" at the Museum of European Art in Clarence, New York.

As the director of the Museum of European Art, I sincerely welcome you at our house of art. We are thankful to Father Matt Nycz and the members of the Buffalo-Rzeszow Sister Cities for having done so much to bring the painter Edward Bialek to our Museum.

As the Honorary Consul of the Czech Republic in Western New York I sincerely welcome the Polish community. There are several of Honorary Consulates in Buffalo and Western new York: Canadian, German, Italian, French, Swiss, Austrian, Czech, Swedish, and Japanese. But it is a pity that up to now, there is still no Polish Honorary Consul in Western New York. So I would like to take this opportunity and encourage not only the Polish, but also the Hungarian communities in Western New York, to look into this possibility and encourage the potential candidates -- both men and women -- to come forward and apply for such positions. They could do much to promote positive cultural, educational, business and tourist contacts between our countries.

For those of us, who have come from the 'Old Europe', art and culture are not luxuries reserved for the rich. Art and culture belong to the ordinary people, and for over two decades I have worked to use art and culture as a bridge between Europe and America to support peace and international friendship on a people-to-people basis.

The theme of today's exhibition is "The Miracle of Creation." An artist-friend of mine, the sculptor Arno Breker once said: "What is the greatest miracle of creation? The human being, in its most perfect and ideal form: the young man and his equal, the maiden. I have never got tired of portraying this ideal of human beauty and dignity in my work."

All around you in this museum you will see portraits of men and women, in paintings and sculptures, the real miracles of creation: here are Salvador Dali, the greatest painter of the 20th century; Hermann Oberth, the father of space flight; Wilson Greatbatch, the inventor of the pacemaker, whose invention has saved and prolonged the lives of millions of people; Alexander the Great, and the French poet Jean Cocteau, the great sage from the Himalayas Swami Rama and the Pope John Paul II, and others.

Among the works of art I like to point out to a small sculpture of a pre-historic huntress by the local sculptor Joanna Dicker-Bachman, and next to it the painting of the John Armstrong, the first man on the Moon by the Toronto painter Lorne Corley. These two works sum up well the technical (unfortunately not the spiritual) progress that mankind has made over the millennia. The art and culture of the Ancient Greece, the cradle of the Western civilization, has greatly influenced our culture from antiquity up to our 21st century. The Greek mythology has been an endless fountain of inspiration to countless generation of painters, sculptors, poets, writers, architects and composers. These myths tell us the stories of gods, heroes and men, and how once Prometheus created the first man. In my heart, I fully agree with that idea of man's creation. One cannot go from ape to man.

That today we have a Polish artist in our exhibition is a "first" for our Museum. It also shows how the times have changed. Not so long ago, the countries of Central Europe -- Czech Republic, East Germany, Poland and Hungary have suffered under the Soviet domination for over 40 years, with no end in sight. "With the Soviet Union, for ever and ever", was a favorite slogan of the communists in those days. I remember very well those days, and how fortunate I was to have escaped from the former Czechoslovakia to the free West in 1969, at the age of 19.

Today I like to remember and honor the man whose tireless engagement for freedom and peace in the world has brought freedom 14 years ago to some 80 millions Czechs, Germans, Poles and Hungarians from the Soviet occupation: RONALD REAGAN.

Several years ago I stood in Berlin at the exact spot at the historical Brandenburg Gate, where Ronald Reagan had uttered those historical words: "Mr. Gorbatchev, let the wall fall!!" The wise statesmanship of Ronald Reagan, which can be summed up by the words "Peace through Strength" brought about the downfall of Communism peacefully, without a shot and without yet another horrible war and suffering of millions of innocent people, which a war always causes. Thank you, Ronald Reagan!!

And from Poland came yet another great man, whose tireless engagement for freedom and strong moral opposition to the Communist dictatorship gave faith, inspiration and hope for the future to millions of people: the Pope John Paul II.

So as we enjoy here today the works of art of one of Poland's successful artists, it is a special pleasure and privilege for us to be able to exhibit in our Museum his recently completed portrait of the Pope. And we send our love, gratitude and admiration to His Holiness, on the occasion of the 25 years of service to mankind as the current Pope.

And now I would like to ask Father Matt Nycz to say a few words about the painter Edward Bialek and his art. Thank you. 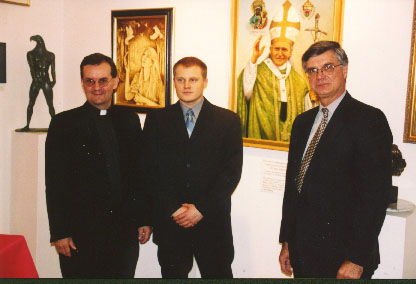 Father Matt Nycz (left) with the grandson of the Polish painter Edward Bialek and George Miecyjak, President of the Buffalo-Rzeszow Sister Cities, at the opening of the exhibition "The Miracle of Creation" at the Museum of European Art.