The acknowledgment of one's ancestry makes for good US citizens 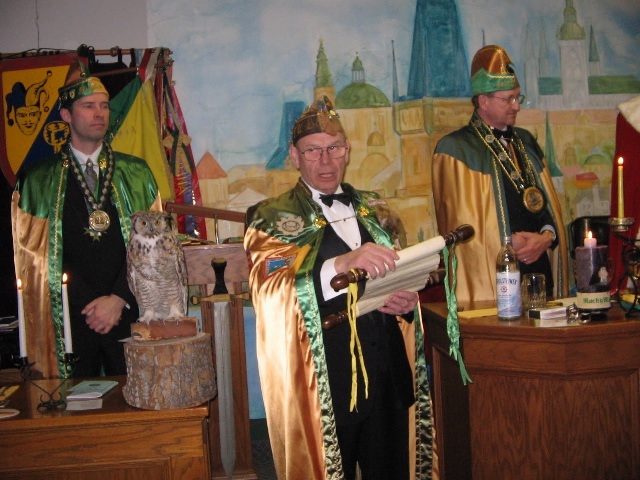 One of the Schlaraffia clubs celebrating an important anniversary of their club.

New York/Washington (bpb) The association „Schlaraffia", a world-wide German-speaking organization which promotes friendship, art and humor, had its 150th birthday on October 10, 2009. It was founded in Prague by Franz Thomé, with a group of artists and friends of art, music and literature. Now, in the 21st century, its groups are found on all the continents. „Schlaraffia" has a long tradition on the American continent. In the USA, with its 52 million citizens of German ancestry, there are many small, but active groups. One of them is „Schlaraffia" in Buffalo, New York.

Worldwide, the United States is a country which has the most immigrants from Europe. Among the many ethnic groups, the immigrants of German ancestry are known for having adjusted well to the democratic system in the United States. And also the newcomers have the same attitude.

Germans have always been appreciated for their inherited and family-trained virtues diligence, punctuality, hard work and dependability. In the American history, many German pioneers have a good name. To them belongs also the late German-American Wernher von Braun. Together with his comrades from Germany, he greatly contributed to the triumphs of the US space travel, finally leading to the first landing on the Moon. The whole of America is proud of this achievement to this day.

Beside these world-known 'stars', similarly also those citizens are valuable, who serve the American society by their loyalty and honesty. No doubt, to them belongs also the unpolitical organization „Schlaraffia". The preservation of the mother language and traditions of the ancestors are not in opposition to integration. The exact opposite is the case. "Only he who knows and respects the roots of his ancestry, can also be a good US citizen", said once the former US President Ronald Reagan on one of his trips to Europe.

Schlaraffia is no secret society and no mattress

The association „Schlaraffia", about which we speak, may not be compared toa secret society, nor to a popular name of a mattress, known in Germany for its comfort for sleeping. It has nothing at all in common with either of these two extremes. Rather, it is an open society, into which every honorable man can be accepted, provided he fulfills the prescribed requirements.

Yes, for an outsider many a rule seems antiquated and hard to understand. But it is quite clear what is a "Ritter" (Knight). This highest level of membership in "Schlaraffia" is reached by a system of several rungs. A Knight can bring in an interested person as a "Pilger" (Pilgrim). The Knight is known as his "Pate" (Godfather), who guarantees that the man is OK. After a certain period as a "Prüfling" (One Who Is Being Tested), the whole membership casts a secret ballot on his acceptance as a "Knappe" (Page). The further road leads over the position of a "Junker" (Squire) to "Ritter" (Knight).. This distinction is sealed by a "Ritterschlag" (The Knighting Ceremony).

Not only the ceremonies of the Schlaraffians reflect the vocabulary of the old nobility. Thus, the meetingplace is called "Burg" (Castle) and the room in which meetimgs take place is called "Rittersaal" (Knights' Hall).

Owl and the White Pearl as symbols

The Schlaraffians are an association of men. The embodiment of wisdom, humor and virtue is for "Schlaraffia" the Owl. Every castle has a stuffed owl as this symbol. For outsiders, Schlaraffians in Europe can be recognized by outsiders by the "Rolandnadel" (Roland's Pearl). It is a small, white pearl worn on the left lapel. Also some groups have their indivitual pins. Car drivers among the members of Schlaraffia often put a decal with the head of an owl on their cars and signal: I am a Schlaraffe!

Connections among the Schlaraffians have in the past suffered under political pressures. In the NS-times, when private, idealistic associations were forbidden in Germany, members of Schlaraffia in Germany and Austria were viewed with suspicion by the regime. Also under the communist regimes, associations of Schlaraffians were forbidden. The small meetings could take place only in secret. Also in the United States, Schlaraffia associations were looked upon with suspicion from time to time. This also took place during the Second World War, when many a politician viewed US citizens of German descent with suspicion. All these ungrounded suspicions proved to be total nonsense.

Worldwide there are 261 „Empires"

According to the information from "Schlaraffia", there now exist more than 260 local organizations, called "Reyche" (Empires) and "Colonien" (Colonies). In them is spoken exclusively in German. The members do not have to be Germans, but must know the language. At this time, Reyche exist in Germany, Austria, Switzerland, Italy, Spain, France, Belgium, Sweden as well as in the United States and Canada. And also in Mexico, Venezuela, Columbia, Ecuador, Brasil, Argentina, Thailand, South Africa and Australia. The total number of Schlaraffians is about 11,000.

Germans and German-speaking men of good character in the United States and Canada, who are interested in this traditional association "Schlaraffia", should contact zavrel@meaus.com . They will receive more information and contact addresses.