Color woodcuts from „The Divine Comedy", with a catalog 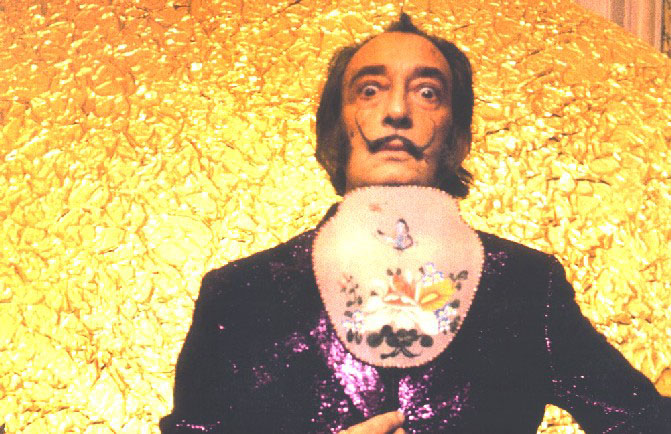 The „Golden Era of Dalí" is depicted in this picture of the photograph Vaclav Chochola. The surrealist painter is posing in fronth of a round gold-plated relief. Chochola made it in the Hotel Meurice in Paris in the year 1969.

Berlin/Prague (bpb) Dalí in Prague! In honor of the surrealist and to commemorate the anniversary of the death of the painter and graphic designer on January 23, 1989, an exhibition of graphic works took place in the Czech capital. Its main part was formed by 100 color woodcuts of Dalí's illustrations from the "Divine Comedy". These fascinating works of art were on loan from the Musem of European Art at the Noervenich Castle near Cologne, in coopearation with the European Art Foundation Berlin.

Also on exhibition was an interesting series of photographs by the Czech photographer Vaclav Chochola, which originated in the year 1969. For these photos, Dalí stood model in Hotel Meurice in Paris. For decades, this hotel used to be the residence of Dalí and his wife Gala, whenever they visited the French capital.

At the exhibition was also available the color catalog „Salvador Dali--La Divina Comedia". In it are shown all the 100 color woodcuts, as well as one additional large format graphic.

In Europe, the catalog can be ordered from info@europaeische-kultur-stiftung.org and in the United States from info@meaus.com