Artist from Canada was made a Lady Knight 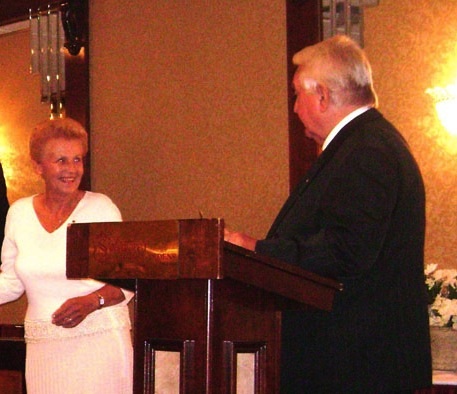 The new Lady Knight Eleanor Pauling after the speach by the European Grandmaster of the Alexander Order, Mr. Joe F. Bodenstein from the Noervenich Castle near Cologne.

Clarence/Berlin (bpb) The International Order Alexander the Great pour le Mérite for Arts and Science welcomed the Canadian painter Eleanor Pauling as a new Knight. "The Order is happy to have another lady in this society of knights", said the European Grandmaster Joe F. Bodenstein, Lord of Noervenich Castle.

Traditionally, men dominated the OAG. On the other side it is known that in the history of the Order, two ladies had leading position as Grandmasters. The daughter of the last German Emperor, Kaiser Wilhelm II., the Princess Victoria Louise of Prussia guided the Order over several decades. Her successor was the diplomat Erica Pappritz, Chief of Protocol in the time of the West German Chancellor Konrad Adenauer.

At present, three ladies are known to be taking active part in the affairs of the Order: The theologian Professor Dr. Uta Ranke-Heinemann (daughter of the late German president Gustav Heinemann), the author Ruth Zucker (Israel) and the painter Dr. Birgit Sewekow. The Order expects that the new Knight Eleanor Pauling will become active in the American-Canadian cooperation on the field of fine arts.

Honoured with an Alexander Dinner

Eleanor Pauling was knighted at an Alexander Dinner in the town Clarence, New York. It was hosted by the OAG Chancellor Consul B. John Zavrel. The ceremony took place in the presence of the international Grandmaster, Dr. Wilson Greatbatch, the inventor of the implantable pacemaker. Among the illustrious guess he welcomed a European delegation, led by John G. Bodenstein. The "Salute America" to the audience of invited guests and knights was delivered by Knight Sigurd K. Kuepper.

The Ribbon of the Order in red-gold-dark blue was handed over to Eleanor Pauling by the European OAG Grandmaster Joe F. Bodenstein, assisted by Knight Arnulf Damerau (London). In his laudatio, J.F. Bodenstein pointed out that Mrs. Pauling has dedicated her life to introduce fine arts to the public as a part of an all-round education. In cooperation with James Culligan, she founded and operates the "Bridges Art Gallery" in Owen Sound (Canada), to give the local artists more opportunities to show their works to the public. The Alexander Order appreciates their engagement to show works of artistes from the area, organize workshops and lectures to make art come alive.

The Alexander Order encouraged Eleanor Pauling, besides her important work for the general public and the art community, not to forget her own career as a painter.

Her landscapes, mountains, lakes, rivers and the paintings of the Niagara Falls are an important contribution to the art of our time.