The global crisis and the search for a fast solution

International meeting with Czech Prime Minister Topolánek: Who is responsible for the disaster?

Berlin/Paris/Washington (bpb) The global economic crises harms nearly every person in the world. The victims mainly the so-called ordinary people. The "milkman" everywhere, as the Americans used to joke. But who is responsible for this tragedy: the bankers, the businessmen, the money-makers and the politicians, or everybody who used to spend more in the past as he really could afford? One thing is clear. The new US President Barack Obama cannot solve the problems alone. Without potential partners in Europe, the "We can" man in Washington would be helpless.

To search for a fast solution of the dangerous problems, the German Chancellor Angela Merkel had invited heads of state and government leaders of the European G20 states to Berlin on February 22, 2009. Four months after the G20 summit meeting in Washington D.C., the politicians discussed the situation and ways toward a better future.

The Prime Minister of the Czech Republic, Mirek Topolánek, took part in this summit in the German capital in his function as the present President of the Council of European Union (EU). At the end, all agreed with the German Chancellor: "The world can only resolve this exceptional international economic and financial crisis by pulling together."

Prime Minister Topolánek declared that he was satisfied with the first results of the meeting. The problems will be discussed at the G20-Summit in London early April. The European G20 partners aim to go to London with a "strong joint position" and make the meeting a success, underscored Chancellor Angela Merkel after a preparatory meeting of the Europeans at the Federal Chancellery. Currently, people and the markets must realize that politicians have learned their lesson from the crisis, Merkel said. It has not yet proved possible to restore confidence on the financial markets. 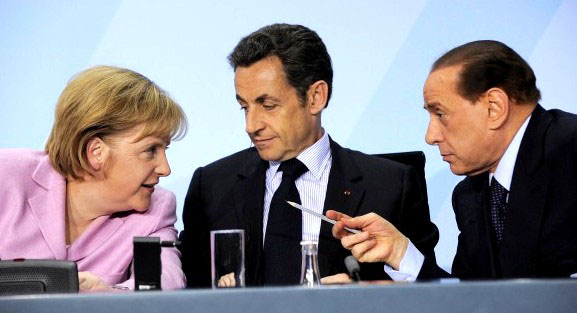 Much to tell each other: French President Nicolas Sarkozy (middle) and Italian Prime Minister Silvio Berlusconi are listening to a strong lady, the German Chancellor Angela Merkel. Germany, France and Italy are the leading European countries on the way to unity Western Europe.

Along with the heads of state and government (such as French President Nicolas Sarkozy, Prime Minister Gordon Brown, Jan Peter Balkenende, José Luis Rodríguez Zapatero, Silvio Berlusconi, EU Commission President José Manuel Barroso, Jean-Claude Juncker and others) also the ministers of finance, the heads of the EU Commission, the European Central Bank, the Euro zone states and the Bank of England attended the consultations in Berlin. It became clear that the Euro states among the G20 nations still aim to tackle the crisis in a rigorous and sustainable way. In view of the current crisis management efforts, the Europeans intend to ensure that national recovery programs do not distort competition.

Protectionism is roundly rejected by all governments. Free trade and open international investment flows are crucial, in order to stabilize the world's economy, declared the final document of the Berlin summit.

Europeans are focusing in particular on further negotiations under the auspices of the World Trade Organization (WTO). In the long term, the Europeans would like to see a charter for sustainable business under the aegis of the United Nations, which would help ensure that there is no repetition of the current crisis. Originally proposed by the Chancellor, this idea is attracting increasing support.

German experts also proposed drawing up a risk map and an international credit register. Both of these are designed to enable politicians to recognize risks for financial markets and for the economy as a whole at an early stage.

The German government spokesman, Ulrich Wilhelm, announced in view to the forthcoming summit in London: a clear message and concrete actions are necessary to engender new confidence in the markets, and to put the world back on a path towards more growth and employment.