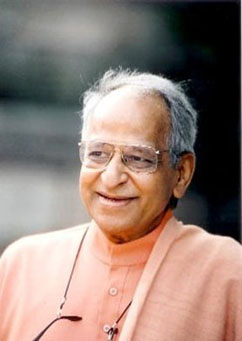 Rishikesh/San Francisco (meaus) The great Himalayan sage Swami Veda has been traveling around the world for the past 60 years, lecturing on various aspects of yoga philosophy and science, and teaching meditation as brought to us by HH Swami Rama of the Himalayas. The following interview was made on March 20, 2006 via e-mail

In 2007 we celebrate 60 years of your teaching mission. From your unparalleled experience, would you please comment on the emergence of Yoga as therapy?

The tradition of healing by yoga is a very ancient one. The Ashrams of the yogis have always been places of refuge from mental and physical diseases. By mental diseases are meant what in Ayurveda are called the adhis, such as anger, jealousy and so forth--the psycho-spiritual failures that often lead to disease in addition to other, agantuka, exterior causes, such as infections. The adhis can only be healed by those who are steeped in the positive psycho-spiritual methods. In the Ashrams of India, the spiritual progress and physical re-training onto health always went hand in hand. In the Tamilnadu state of India the archeologists have found temple(s) that had hospitals attached even 1500 years ago.

It is possible, therefore, that the use of yoga as a therapy is not a purely modern, western invention. It is steeped in the Tradition. I recall a number of episodes concerning my Master Swami Rama of the Himalayas with regard to this fact. Quite often a seeker would arrive at his Institute seeking spiritual guidance. As soon as he came in the inspiring presence, Swami Rama would call one of his devotee doctors and order to get this person tested for any heart, liver, etc. imbalances or disorders. The seeker would protest: Swamiji, I am in perfect health; I have come for spiritual guidance. But Swami Rama's order to the doctors remained in force. The person would be tested, would be prescribed a therapy, dietary and exercise discipline etc. In the case of this particular devotee, this is where spiritual progress began. Many yoga therapists were given Swami Rama's thorough training in using yoga to confer this benefit.

The practitioners of yoga who learned from the teachers from India must have imbibed similar traditions and have modulated them to serve the therapeutic needs of a resident of an American city.

Because the system of yoga is so all rounded, so complete, it could not but become popular. It leaves no area of human personality or conduct untouched, unmodulated and it is this completeness that has made yoga therapy so popular.

However, I am greatly pained when I see that in a body-bound society, yoga often becomes merely a tool for physical fitness, stripped of its true essence: spirituality by personal experience.

For years you have been the subject of scientific research in the United States, Europe and India, involving meditation. How has this research benefited the practice and teaching of yoga?

Scientific research in various areas of meditation and related fields has been going on for the past seven and a half decades. It has nothing to offer to a yogi per se in realizing his/her internal goals. However, it has helped the scientists and the yoga practitioners with a modern mind set to understand the processes by which an act of pure will such as concentration or internal relaxation brings about positive psycho-physiological or neuro-physiological changes that are extremely beneficial to the individual's mental and physical health and can also effect greatly desirable improvements in family and social relationships.

Take, for example, biofeedback. It is obvious that training the mind in a certain direction helps us restore long lost controls over the faculties we have forgotten in ourselves. The yogi has already discovered these controls and these faculties. S/he has nothing new to learn from these technologies. S/he uses this tecknowledgy (SVB's neologism) to convince the commonly sceptical world.

Why would we want to convince them? For the same reason that a mother helps the child to discover the ability to walk and talk, and helps him/her develop these potentials to the fullest.

Swami Rama often said that human beings are an unfinished product. It is by re-discovering their spiritual entity that they are brought to a 'finish', a completeness, fullness. Whatever will help a yogi to accomplish this purpose for human beings, s/he will resort to that.

For six and half decades I have practiced yoga-nidra, conscious sleep. I only know the way to experience this subjective state. No philosopher or logician or scientist needs to convince me that such an internal state exists. Until I met my Master, I (1) practiced yoga-nidra naturally, and (2) read his word in the texts, but did not know that the word referred to this particular subjective state. Upon sitting at the feet of the Master I found out the equation of the word and the state. Then I heard of his experiments at the Menninger Foundation (see note) and realized that during this state the brain produces delta frequency of waves. Now, when a scientist wants to see whether I can produce delta at will, I know what subjective state of mind s/he is referring to but s/he has not taught me the state. S/he has only measured frequency of the brain waves that are correlates of that state.

It helps me to teach others that scientific proof exists for the validity of what the Indian texts and teachers have taught for thousands of years. It helps enhance their shraddha, faith that they are on the right path.

While I can use all the scientific proof I can muster as an additional argument in favour of our teachings, I would not like the students to become dependent on a machine to gain access to spiritual realities. The intrinsic value of biofeedback and neurofeedback is like that of chalk and blackboard to teach a mathematical equation.

People in many religions and spiritual traditions are meditating and praying for peace and wisdom. Can this provide the stability we need as a global family to help us overcome hatred?

First, we must know what prayer is. Yelling many words at God in the loudest voice possible is not prayer. "Has God turned deaf?"--asks Kabir. From a yogi's point of view, it goes as follows:

The universe is a field of consciousness. Our minds are waves in this ocean, and the thoughts are ripples. Prayer means letting a beautiful thought spread in ripple after a circle of ripple to fill this ocean. If it is wordless, it has the subtlest effect. Those who know the art of this wordless prayer can bring about a change in the stormy seas of the earth's collective mind.

Praying for peace means first having one's own mind in the most peaceful state. Then letting its calmness spread.

Swami Veda's master, HH Swami Rama of the Himalayas directed his life towards the unification of science and spirituality. His Master, Bengali Baba suggested that he could help bring Eastern and Western science closer together by working with psychologists and medical doctors who were studying mental and physical phenomena. Upon the invitation of Dr. Elmer Green of the Menninger Foundation of Topeka, Kansas, Swami Rama was a consultant in a research project investigating the voluntary control of involuntary states in 1970.