Rodin at the Museum Arno Breker

The bust of Balzac in the classical collection 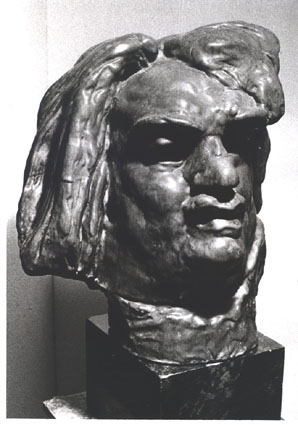 The photograph shows the portrait of Honore de Balzac by Auguste Rodin. It is a masterpiece in the collection of www.museum-arno-breker.org. Important works of Rodin we find also in Museums and collection in the United States of America and Canada.

Berlin/Noervenich (bpb) The portrait of Balzac by Auguste Rodin (1840-1917) belongs now to the art collection of the Arno Breker Museum in Germany. This fine bronze is one of the masterpieces in the Museum, dedicated to the most important sculptor of the classical tradition in the 20th century: Arno Breker (1900-1991). Breker was the last living sculptor of the famous European arts group Rodin-Charles Despiau-Aristide Mailoll. Breker was a close friend of Despiau and Mailoll.

The Rodin bronze placed at the museum commemorates this friendship", says John Gilbert Bodenstein, president of the European Art Foundation (Europäische Kultur Stiftung) Berlin. "Breker has developed the sculpture of the human figure to a new, modern dimension, based on a high respect and love of humanity."

Over 100 years ago, Rodin's larger-than-life size monument of Honore de Balzac provoked a scandal in 1897. Rodin first made a naked, fat Balzac. It provoked the public's displeasure, because of the association with an erected phallus. Finally, Rodin decorated the figure with cloth. Other cynical reactions interpret the Balzac as Narcissus, who masturbates under his protecting coat. As a matter of fact, Rodin had first created a nude study of Balzac with stiff penis in his left hand, before he had started covering him with cloth.

After 1900, Rodin used to work and live inside of the Hotel Biron in Paris. His neighbours are Rainer Maria Rilke, the dancer Isadora Duncan, and later Jean Cocteau and Henri Matisse. After the death of Rodin, the finished bronze of Balzac was placed in Paris. Aristide Mailoll took part at the Grand Opening. The sculpture was made in the foundry of the famous Alexis Rudier. He worked also for Mailoll and Arno Breker until 1946.

Rodin in USA and his Museum at Philadelphia

The Auguste Rodin Museum in Philadelphia owns the largest collection of artworks by this artist outside Europe. Jules E. Mastbaum, Philadelphia's great movie theatre magnate and one of its best known philanthropists, began collecting works by Auguste Rodin in 1923 with the expressed intent of founding a museum to enrich the lives of his fellow citizens. He set about assembling a complete view of Rodin's work, acquiring not only finished bronzes, but plaster studies as well as drawings, prints, letters, and books. By the time of his death in 1926, Mastbaum had brought together the greatest Rodin collection outside of Paris. He had also commissioned the two great French neoclassical architects working in Philadelphia, Paul Cret and Jacques Gréber, to collaborate on a museum and garden, but did not live to see it completed.

The Rodin Museum, which opened to the public in 1929, houses 124 sculptures, including bronze casts of the artist's greatest works: The Thinker, perhaps one of the most famous sculptures in the world; The Burghers of Calais, his most heroic and moving historical tribute; Eternal Springtime, one of the most powerful works dealing with human love; powerful monuments to leading French intellectuals such as Apotheosis of Victor Hugo; and the culminating creation of his career, The Gates of Hell, on which the artist worked from 1880 until his death in 1917.

Unfortunately, the Rodin Museum in Philadelphia did not yet care to add to his unique collection also works of Arno Breker (www.arno-breker-museum.org) The art of a great century could be completed if the Rodin Museum USA included works of Charles Despiau (who worked for some time with Rodin), and his friends Mailoll and Breker.