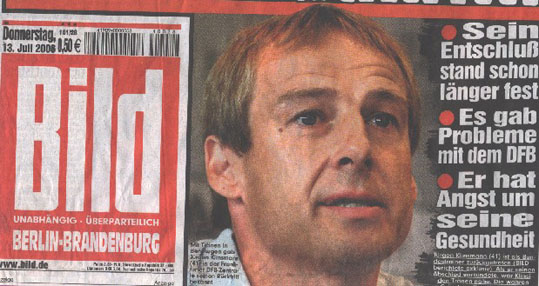 Back home to the USA: Jürgen Klinsmann returns to California. The trainer of the German National Soccer Team for the last two years will settle down with his family on the West Coast. The famous European newspaper BILD revealed to the public, why.

Berlin (bpb) The Fifa World Cup Germany 2006 was not only a Festival of Friends, but also a big business for local institution and for politicians. From an American point of view, one can say: Soccer is also a war on the soccer field. The former World War II enemies can fight against each other. The winner of the cup 2006 was Italy (formerly an ally of Hitler's Germany). Among the three top ranking national teams are France and Germany.

The US team had to quit soon after the beginning. The American players were not fit for the match with more experienced teams. From Germany's victory over Costa Rica in the Opening Match in Munich on June 9th to Italy's triumph over France in the Final in Berlin exactly one month later, events in Germany kept an estimated audience of more than 30 billion people worldwide captivated.

Everyone watched as a cast list incorporating 32 teams from Angola to the USA conspired to excite and enthral during a 64-match, 147-goal marathon attended by 3,359,439 people in the 12 stadiums--and millions more in Fan Fests across Germany.

The German President Horst Koehler and Chancellor Angela Merkel took several times the opportunity to act as soccer experts on TV and in films, in order to increase their popularity. The soccer fans in Germany became obsessed with the championship for weeks. During this time, the Christian Social Democrats leading the German Government could rule as they pleased. People and the media had hardly any interest in what they were doing.

In the finals of the World Cup, France was fighting against Italy. The public opinion saw the French team as the winner. But in the end--the winner is Italy. France was more than disappointed. There is a historical hate between this two nations, which are now together in the European Union. The most popular French soccer player, Zinedine Zidane attacked Italy's Marco Materazzi with head staggers. Three days later, Zidane defended his action with the argument: "Materazzi has started the controversy. He insulted my mother and my sister. Not only once, but three times. I had to do what I did."

The controversy on the soccer field has escalated into racial dimensions. The Italian politician Roberto Calderoli (Lega Nord) scolded the French players as a "team without identity". Italy won against a team with "Negros, Moslems and Communists". On the other hand, Italy was fighting with a national team of Lobards, Campanies, Venetians und Calibres. "This is a victory for our identity", said the Italian politician. He was criticized later in some media for these "racist" words.

Calderoli pointed out that more and more European soccer clubs engage black Africans to play soccer for them. The request of most of the European fans is: each soccer nation should only play with its own native people, and "should not buy African players like slaves".

The war on the soccer field goes on after the World Cup in Germany. Only one soccer star will not take part any longer: Jürgen Klinsmann. The trainer of the German National soccer team has quit his job, and after two years returned back to his wife Debby in California. It is said that she was the main reason for giving up his job. Klinsmann will take a vacation for six month with his family, which includes two young children: Jonathan (9) and Leila (5). Although his fans are very disappointed that Klinsmann left Germany, they wish him good luck.