Celtic Myths and Legends: A Revival in the 21st Century? 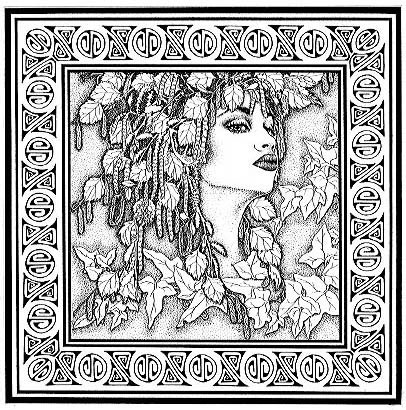 CAITIN, by Sara McMurray-Day. Collection of Museum of European Art.

There is renewed worldwide interest in the ancient myths and legends. Not only the unsurpassed myths of the Ancient Greeks about Zeus, Athena, Apollo, that have inspired European painters, sculptors and poets for hundreds of years, but in the last 15-20 years there has been growing, interest in ancient mythology in general.

On the one hand, in the Indo-European mythology we are enchanted by the ancient India epics such as Mahabharata and Ramayana, the stories of the ancient seers and rishis, the trinity of Brahma, Vishnu and Shiva, and the Great Goddess. On the other hand, the Celtic culture (historically spreading from Austria, Moravia and Bohemia to Germany, France, and from there on to England, Wales and Ireland) has come up to the public consciousness mainly through the offorts of the English-speaking writers and artists, who are concentrating on the aspects of the Irish-Welsh myths and legends.

One of the most popular collections is "The Mabinogion Tetralogy", a collection of Welsh myths. One of the most readable editions of these is retold by Evangeline Walton (1907-1996). Generations have been thrilled by its magical adventures, set at a time when men and gods mingled, and the gods had more than met their match; tales of the wizard-prince Gwydion, of Prince Pwyll and Lord Death, and of the beautiful Rhiannon and the steadfast Branwen.

In the masterful hands of Evangeline Walton the twelve 'branches" of the ancient text are reworked into four compelling parts: "The Prince of Annwn", "The Children of Llyr", "The Song of Rhiannon", and "The Island of the Mighty".

In "The Prince of Annwn" the seeds of future tragedy are planted. Young Prince Pwyll meets Awawn, the God of Death, and survives the encounter with a heavy charge: to take on Arawn's guise and kill for thim the one man even Death could not fell. "The Children of Llyr" chronicles the great family of Bran the Blessed, and their epic struggle for the throne. In "The Song of Rhiannon", the struggle continues with Manawyddan and his son Pryderi, the rightful heir to the throne, against the force of an ancient curse. In "The Island of the Mighty", the throne of the kingdom of Gwynedd is in peril when Gwydion, the headstrong heir, dars to provoke the legendary wrath of Lord Pryderi.

In their turn, these ancient legend of the ancient past have come to inspire in our days a new generation of artists, especially painters--to make these stories come alive with their depictions of Pwyll, Rhiannon, Bran and his sister Branwen, Etain, Blodeuwedd, Gwydion, and Arianrhod. 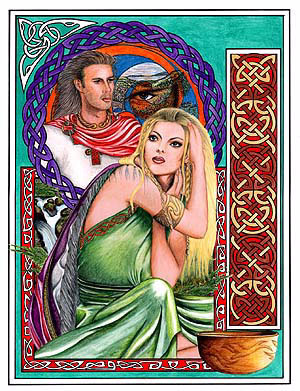 'Etain' by the Welsh painter Sara McMurray-Day, now living in Ireland. From the collection of the Museum of European Art.

There is a wealth of books on the various aspects of the Celtic mythology and legends. One of the successful writers is R.J. Stewart, who wrote the highly interesting book "Celtic Myths, Celtic Legends", illustrated with 12 color illustrations by Courtney Davis.

The book gathers together a range of tales from Ireland, Wales, Brittany and England. Each one is representative of the Celtic tradition of story-telling and legend, showing both the beauty and savagery within the stories as well as their spirituality and sensous qualities.

The main sources of materials in his collection are:

3) Folklore, traditional ballads and traditional tales. This third category is an important and often ignored source of Celtic myths and legends, even in the present century.

Two particular themes emerge from this net of myths and legends. One is the presence or re-emergence of the Great Goddess, known by many names in Celtic tradition, from the blood-drenched Morrighu (Morrigan) to the shining Brigit and the mysterious Queen of Elfland.

The other is the paradoxical role of the hero, at once warrior, buffoon, and willing sacrifice for all.

A third theme, woven in between the other two, is that of love triumphing , sometimes mercilessly, over all opposition.

"Celtic Myths, Celtic Legends" is illustrated with outstanding color paintings by Courtney Davis, specially commissioned for this book, and line drawings by Sarah Lever. The book provides a fascinating insight into the Celtic world, and is a must for everyone interested in mythology.

So, here are some of the adventures of the Celtic gods and goddesses, the queens and powerful women, the heroes, the saints and madmen, the fools and lovers.

The Museum of European Art in Clarence, New York has started a new collection on the theme 'MYTHS AND LEGENDS IN ART'. Original works of art--paintings, drawings, sculptures and mixed media--are being accepted into the collection at this time, in preparation for an art exhibition on this theme in October 2004. Artists interested to take part in the exhibition should contact the Museum's director John Zavrel at zavrel@meaus.com for more information.

The Mabinogion Tetralogy, by Evelyn Walton.

Mahon and the Mysteries of Britain, by Caitlin Matthews.

The Mystic Life of Merlin, by R. J. Stewart

Warriors of Arthur, by J. Matthews and R.J. Stewart