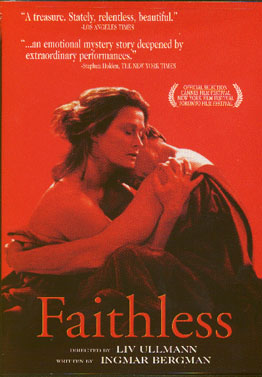 "I had a husband who loved me, a child who trusted me, and a friend who seduced me". With these words starts the new 142-minute Swedish film, an unmatched masterpiece of modern cinema, based on the life of Ingmar Bergman.

Only rarely these days do we come across a film which makes such a lasting impression on our mind, and gives an impulse for deep thought about our emotions, actions, and our struggle to try to understand the incompressible workings of the human soul.

'Faithless' is a film that explores love, infidelity, guilt, pain, and humanity. The film was written by the world-renowned director Ingmar Bergman, and directed by Liv Ullman, a Swedish actress who was formerly Bergman's wife.

Many of us will recognize parts of ourselves -- or of our friends and acquaintances -- as the plot slowly, steadily develops through dialog, almost like a play.

The film begins with an old, retired film director named Bergman, who summons his muse in order to write a screenplay. At first invisible and reluctant to show herself, Bergman's muse eventually appears as Marianne, his former wife. Marianne slowly discusses her previous marriage to a famous composer, Markus, and the subsequent events that resulted in her leaving him for his friend and artistic collaborator, David -- who is also Bergman himself, when he was younger. The conversation takes place over several days in Bergman's seaside house and assumes the form of flashbacks. The story is not a happy one, and exploring it is clearly a painful experience for Marianne, and for Bergman who for, perhaps the first time, is able to empathize with her and is able to view his own role from the perspective of detached wisdom and sorrow.

Marianne has no obvious, rational justification for leaving her husband Markus, who appears to be a good husband and who pleases her in bed. Yet at the same time she feels no choice but to give in to the emotional change that slowly, and irresistibly draws her to David, a long-time friend. Then one day, all of a sudden, she comes to see him as a different person than in the past, and her life changes completely.

Bergman and Ullman are not trying to pound blunt ideas into our heads with obvious characters and a simple plot. Many of the ideas in this film are subtle, even paradoxical. It raises many disturbing questions and provides practically no obvious answers.

'Faithless' is a penetrating and honest psychological exploration from start to finish, and closely resembles Bergman's earlier films in style and temperament.

The powerful and rewarding thing about 'Faithless' is that it relentlessly explores universal emotional and psychological truths that apply to all of us. Many of the terrible things we do in life have no concrete material or circumstantial justification, but they do have a powerful emotional one that is almost impossible to explain.